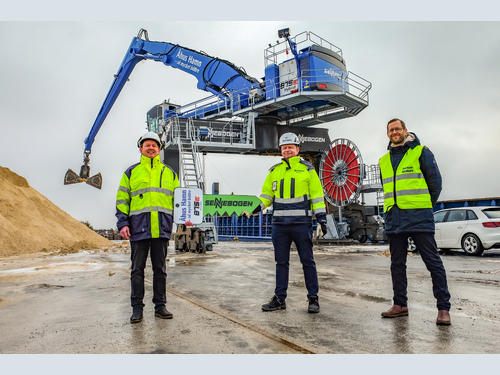 Handover of the SENNEBOGEN 875 E to the Port of Åhus (from left to right): Anders Wänglund, responsible for port machines at OP System, Fredrik Åsare, CEO of Åhus Hamn & Stuveri AB, and Fredrik Hagwell, CEO of OP System. 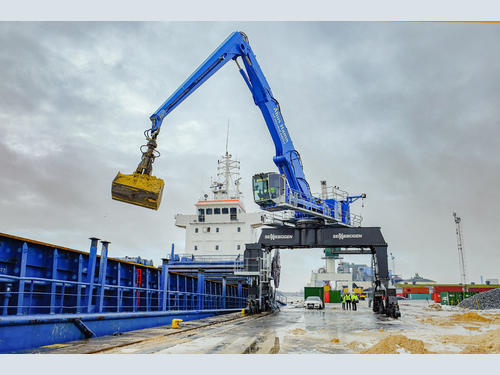 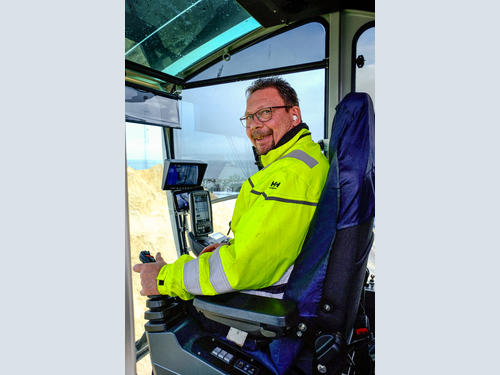 Thanks to the spacious Mastercab with floor window, the driver enjoys perfect all-round visibility for precise loading of various bulk materials 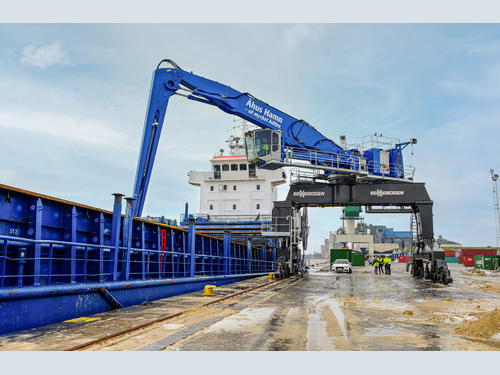 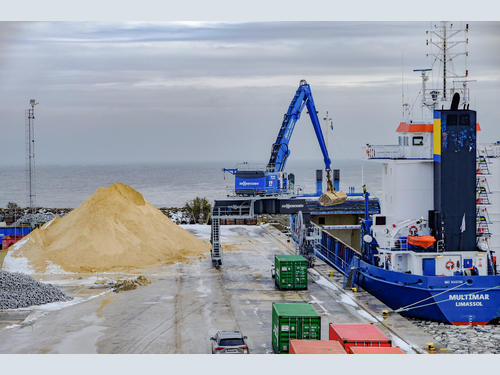 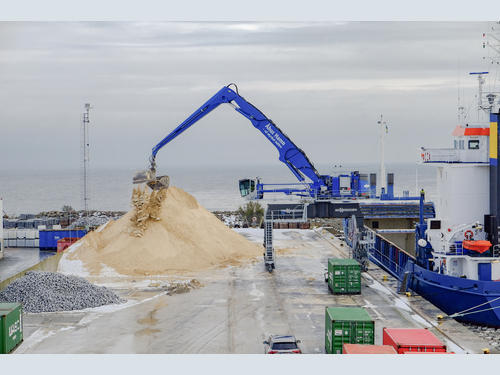 The Port of Åhus in Skåne has invested in a SENNEBOGEN 875 E material handler with 391 kW electric motor and a total weight of 165 tons: in cooperation with sales and service partner OP System, they configured a special machine with rail gantry customized to the port's existing 10 m railway track width. An old crane from 1977, whose handling capacity was no longer up to date, was replaced by the 875 E. At 550 tons per hour, the blue eye-catcher in the port of Åhus now handles around 55 % more material than its aging predecessor, whose operation was no longer state-of-the-art or economical enough.

Blue like the surrounding sea with massive savings potential: investing in an electrically powered SENNEBOGEN 875 E was an important decision for the port in Åhus, Sweden, which attaches great importance to the protection of the environment: not only in terms of emissions, but also in terms of the noise generated by large machinery. Thanks to the combination of an electric drive and state-of-the-art recuperation technology from SENNEBOGEN, the Swedish port professionals are now saving a maximum of energy, while at the same time increasing handling capacity by around 55 %: Since November 2020, the giant blue material handler has been unloading 550 tons of gypsum per hour, around 200 tons more than the 43-year-old harbor crane, which has now been replaced by the 875 E. The Port of Åhus handles a total of 600,000 tons of dry cargo annually, more than 70 % of which is bulk, such as gypsum or chalk.

PUR­POSE-BUILT MA­TE­R­IAL HAN­DLER FOR THE PORT OF ÅHUS DE­SIGNED BY SENNEBOGEN
A key feature is the Mastercab and its long-term value retention: the galvanized surface makes it less prone to corrosion caused by salt water. Also, the steel structure of the 24-meter-long equipment is protected from environmental influences with the help of a 240 μm-thick paint coating. This alone does not make it a "specialized" equipment, as it was rather custom-made and realized for the first time for this customer's project: Combining a relatively short 13.5 m boom with a 12 m stick in the "Port" version made of particularly lightweight, high-strength steel ensures a massive weight saving. With the result that overall more load capacity is possible at the stick’s end. Accordingly, the port operators can now effortlessly lift the gypsum loads weighing around 8 t with the 6 cubic meter grab in even faster cycles.

POWER SUP­PLY ALONG THE 250 M LONG QUAY
All SENNEBOGEN rail gantries are customized and have to be adapted to the existing rail dimensions in the port: In the case of Åhus, the machine runs on a 10 m wide rail gantry along the 250 m long quay. The power supply is also tailored to this length, and in this particular case is provided by a spirally winding motorized cable reel with a center feed. Along the quay there is a clever system to protect the cable: the flaps open and close automatically as the cable is directed over the funnel into the ground. This flap mechanism is controlled in its movement by the gantry itself using levers based on the zipper principle along the entire quay length. Thanks to the 390 kW electric motor and a matching low-temperature package that quickly heats the hydraulic tank and hybrid system to operating temperature, the material handler is always ready for action – even in adverse operating conditions in the far north.

DRI­VER PRAISES COM­FORT, SAFETY AND FUNC­TION­AL­ITY OF THE IN­NO­V­A­TIVE MA­TE­R­IAL HAN­DLER
The operators also had their say when the specifications were being drawn up. After all, it is their working environment in which they spend many hours every day. The keywords comfort, safety and functionality were important aspects in the project phase of the innovative material handler. Ulrik Johnsson, one of the drivers, is very satisfied with his workplace after a three-month period of getting used to it, but also with the performance of the machine in general:

"The speed of the 875 E is remarkable: it used to take one and a half working days to unload a 4,000 t bulk carrier, but today you can easily do it in one day. And the comfort in the cab is great. I hardly feel any vibrations and the noise levels have been reduced by far."