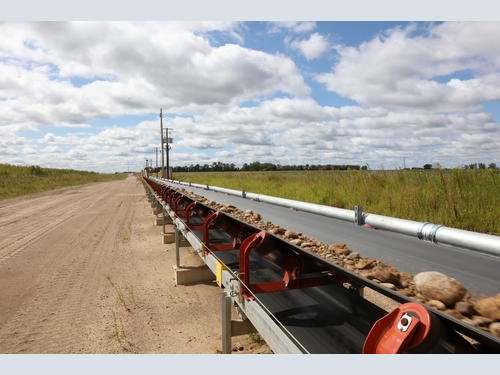 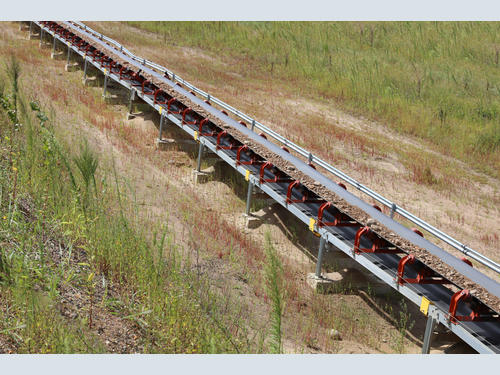 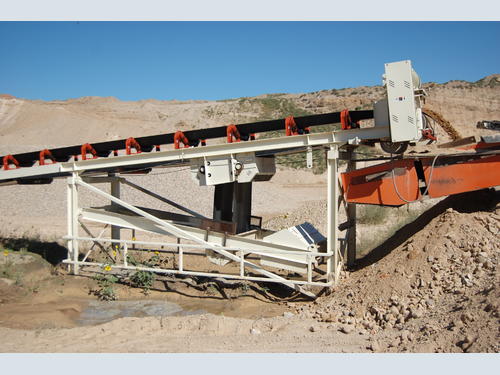 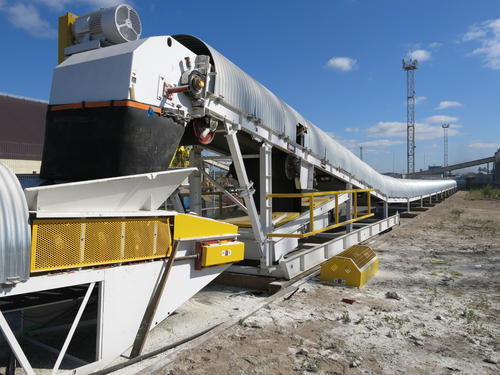 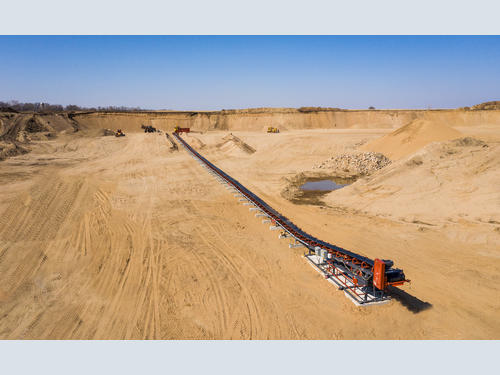 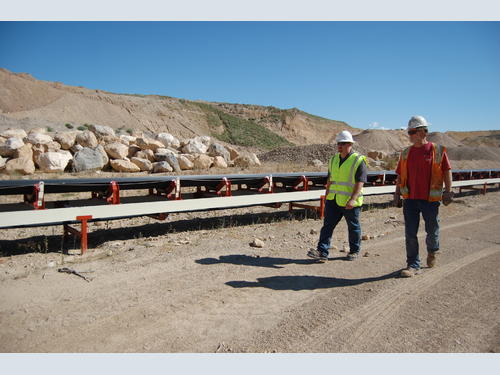 In its second season and operating a brand-new processing plant, Dakota Aggregates mines on seven million square meters within the University of Minnesota Outreach, Research and Education Park. Located in Minnesota, USA, the mine serves the Minneapolis metro area with a wide variety of construction aggregate products. The operation was designed with innovation in mind, particularly where material handling is concerned. The site spans five kilometers from north to south, and a two and a half from east to west. Consequently, overland conveyor systems were chosen to efficiently transfer material from the face to the processing facility, while eliminating the costly use and resulting emission streams of loaders and haul trucks; and providing quiet operation while minimizing energy use and lowering operating costs per ton.

Initially, the challenge for Dakota Aggregates was finding a lower cost overland alternative versus that of custom-engineered, conventional overland systems – and most importantly, one that would allow them to easily and quickly reconfigure their overland systems to accommodate changing mining requirements each season.

Dakota Aggregates has a substantial 40-year lease on the university-owned land where melting glaciers had left behind a thick blanket of high-quality sand and gravel thousands of years ago. Mining this deposit is part of an overall sustainability focus. A few of the big benefits of this initiative is that the local region taps into the cost-efficiencies of a valuable and nearby source of aggregate products, while the university realizes an additional long-term revenue source. And, for every ton of gravel mined, a portion of the profit goes into a scholarship fund for geology and civil engineering students at the university. It’s a win-win deal for all and an example of innovation at its best.

“It was refreshing to share our input on the system with the engineers at Superior and to work with them on various enhancements to this new product,” says Stacey Hannover, operations manager for the Dakota Aggregates plant, which processes more than 1.4 million tonnes of aggregate products annually.

The site mines from its furthest boundary and back toward the processing plant. “While we are generally pulling conveyors out and shortening the distance of conveying, we can easily add on sections in other areas of the operation. We needed flexibility at the right price point. With the Zipline Conveyor, we have ease of assembly and ease of onsite portability,” says Hannover.

The operation utilizes a total of 1,500-meters of modular conveyor sections (at lengths of 10-feet each and belt widths of 762 to 914mm) which is currently divided into six different overland systems of 150- to up to 300-meters. “It’s easy to reconfigure any one of our modular overland systems to cost-effectively meet our changing requirements each year. As an example, during last season, we easily pulled 75-meters out of one system. Also, while we generally operate on level ground, next season we will be moving a section to accommodate material transfer on an area with a 15-percent incline,” says Hannover. He adds that installation is “pretty much a breeze. Once we got the pattern down, three crew members marched right down the conveyor corridor and were able to assemble 300-meters of overland conveyor sections in a ten-hour day.” The crew used a forklift and a skid steer loader with no need for cranes or other heavy equipment.

Engineering perspective
“We began with the mission of being tool-free in installation requirements regarding the entire intermediate area between the head and tail sections,” says Travis Thooft, a member of the Superior Industries engineering team. He explains that this required creating a new type of “fastening system” that is structurally sound and reliable yet is quick and easy to use in the field.

“When you consider the typical way to put things together, the industry standard is basically weld or bolt. We took it a step further by eliminating bolts and replacing them where possible with a ‘fixed-pin’ connection. We wanted to eliminate the need to bring out a set of wrenches for most installations,” says Thooft. He estimates that the new design can cut installation time by up to 75 percent. “Basically, you hook in one end and then the other, with the whole setup for a 3-meter section taking just about five minutes,” he says.

Thooft goes on to explain that the specification process starts by defining the overall length of the overland system, and the required horsepower. The system includes a pre-engineered head assembly and tail section and is designed with off-the-shelf components for easy sourcing of replacement idlers and pulleys. “Producers can customize with options such as self-aligning troughing idlers or special return trainers, idler guards, and belt cleaners; or a longer or different type of gravity take-up for example,” he adds.

When compared to the spec-by-spec, highly engineered system, Thooft says that the Zipline Conveyor system is a lower cost overland alternative. “While it’s lighter in weight, it offers the structural strength of the conventional overland system. Its big advantage is its ‘modularity factor and unique fastening system,’ which allows easy structural additions in the future; and easy site reconfigurations as needed. It also allows operations to choose (depending upon the project) between renting modular sections from their local equipment dealer or purchasing a package of sections that they can customize within a given set of parameters,” he says.

Driving overland solutions
What are the key drivers behind more and more operations turning to overland conveyor solutions? Certainly overland conveyors offer cost-effective material transport within a wide spectrum of capacities – and when used in place of loaders and haul trucks, operations are significantly reducing fuel costs and expenses due to labor, training, emissions, maintenance and engine depreciation.

With the advent of the pre-engineered and quick-to-install, modular overland system, producers such as Dakota Aggregates can acquire a system with a lesser initial capital investment than that of conventional systems, and can operate with greater efficiency, flexibility and sustainability into the future.