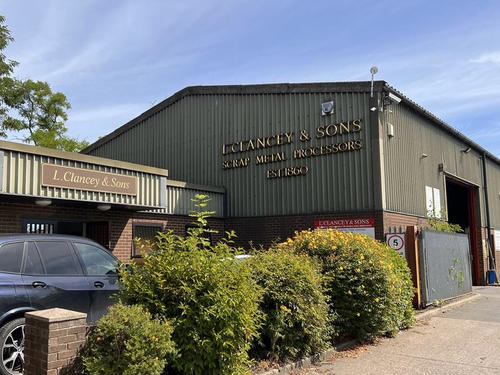 Midlands-based metal recycling and waste management specialist, Ward, has welcomed York scrap merchant, L. Clancey & Sons into its extended family with the acquisition of its metal processing business in York.

Independent, fourth generation family run business, Ward, has completed a deal with L. Clancey & Sons for its 3.9-acre scrap metal site in York and the business as a going concern. The acquisition of the business will further enhance the nationwide capabilities of Ward, offering greater coverage in the North of England, while enabling the succession planning of Clancey’s, as two of its partners take retirement.

Clancey’s has a well-established reputation, developed over its 160 history and this successful operating model will be maintained, as will the business name. One of the sellers, Richard Clancey, a member of the founding family, will stay on as Site Operations Manager, employed by Ward and all other staff are being retained.

Thomas Ward, Commercial Director at Ward, said: “This is a really exciting time for both our family businesses. Clancey’s have a solid reputation in metal recycling, they share our values, outlook and approach to customers. We hope they will become an extension of the Ward team operationally, while retaining its own identity.

This new site gives us even more geographical reach for both businesses with good transport links to our Midlands, Immingham and Redcar sites.”

Richard Clancey, partner, at L. Clancey & Sons, said: “Both our businesses are strongly family orientated and we have very similar values, from the way we look after our teams to the way we support our customers. This will be a really positive step for us all. Both myself and my daughter are looking forward to working with Ward and seeing what we can achieve together.”

Ward was supported with legal advice from Square One Law (led by Charlie Fielding) and financial due diligence was provided by PKF Smith Cooper (led by David Nelson). Azets (led by Stephen Garbett) and Harrowells (led by Matthew Rowley) acted on behalf of L. Clancey & Sons.

Ward is multi-awarding wining family business, recently named among the Top 200 businesses in Derbyshire and recognised in this year’s Queen’s Award for Excellence in International Trade. Investment in the new site at York complements Ward’s existing metal processing and recycling facilities across the Midlands, Teeside, Lincolnshire and London, enabling the metals specialist to expand its nationwide metal recycling capabilities.