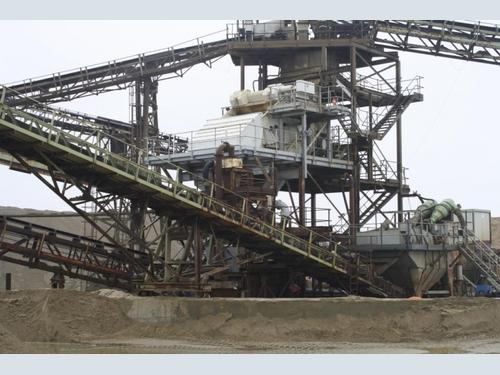 Owned and operated by Brett Aggregates Ltd since the 60’s the North Sea Terminal site is located at Cliffe, Rochester and incorporates a ready-mix plant, bagging plant, block making factory and railhead.  Sea dredged sand and gravel during busy periods is delivered twice daily by self-discharging dredgers with the site receiving six cargo’s over 3 days per week, averaging a total of 9,200 tonnes.

The busy site produces approximately 70-90,000 t/month which is supplied to the on-site plants, local construction sites by road, and the remainder via rail with two trains a day to the London area.

With sea dredged sand and gravel being delivered to the plant by land conveyor from the ship berth at 450tph it is imperative that the primary screen is efficient and easy to maintain. With the issue of the old screen underperforming Brett’s approached Tema Machinery to quote for a replacement. Following a site survey Tema then took the Cliffe Wharf team on a site visit in Germany to enable them to view Siebtechnik screens in action.

Derek Knight – Area Production Manager, commented, “We visited a Rhinekalk site in Germany which produces 10 million t/annum. I observed the Siebtechnik screens working in lines of four on three different floors in the screen house, giving a total of twelve screens. This was really impressive and gave a good representation of the screens performance in a very busy and harsh environment.”

Having demonstrated the ability and performance of Siebtechnik screens, Brett’s then had no hesitation in placing an order for a replacement screen as part of a small plant refurbishment. Tema subsequently supplied a Siebtechnik HG double-deck – 3 x 6 metre screen fitted with WS85 polyurethane panels (20 over 4) which were supplied by their associate company Tema Isenmann.

Replacing the old circular motion screen, the Siebtechnik double counterweight HG screen supplied to Brett Aggregate provides a freely vibrating linear motion and features a twin gear exciter to develop the amount of necessary out of balance mass to achieve the correct screening dynamics. Designed with sub I- beam cross members the new screen was fitted with stage 3 cross member protection in the form of foam filled cavities. These cross members accommodate the Isepren WS85 rails which are bolted directly onto these.

The Siebtechnik HG screen supplied to the North Sea Terminal site is fitted with Isepren WS 85 polyurethane panels which were supplied by Tema Isenmann. Acknowledged as the proven industry standard, these are the most versatile and cost effective modular system available on the market today, achieving excellent results with all separation sizes, in many applications including sand and gravel, granite, quartzite, silica sand and limestone.

Based on a superior design concept Isepren WS85 combines guaranteed performance and service with efficient screening. Proven under the most difficult conditions Isepren WS85 reduces screening costs to a minimum, reduces noise to acceptable levels and is easily fitted to all screening machines.

Isepren WS 85 modular panels are manufactured with integral reinforcement bars parallel to the panel width and selected for each individual application to accurately transmit the dynamic forces of the screening machine and support the bed of the material.

As part of a small plant refurbishment the installation of the new screen was completed in six weeks alongside the replacement of the platform and associated steelwork which was completed by Whitwick Engineering.  The new Siebtechnik HG screen has provided greater tonnage and substantially easier maintenance – allowing easy access to screen media with ingress and egress vastly improved in comparison to the old equipment. Additionally, a rubber curtain was also installed on the back plates to allow access between the decks.

Derek Knight – Area Production Manager, further commented, “We are delighted with the performance of the screen, and the service and support given to us by Tema and Siebtechnik; I would have no hesitation in contacting them both for future requirements and support.”