Ben Miller, proprietor of East Lothian based BM Excavations has taken delivery of a second bespoke Volvo EC140ELM excavator for his contracting business. 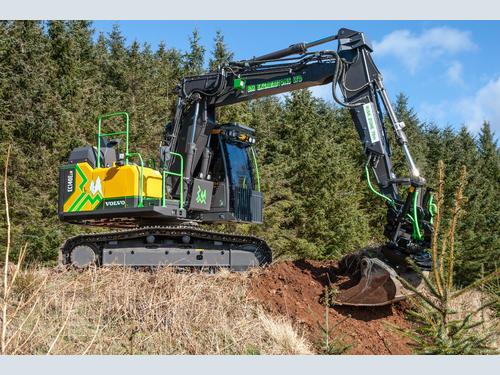 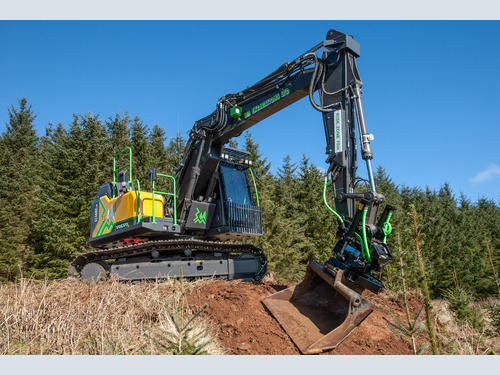 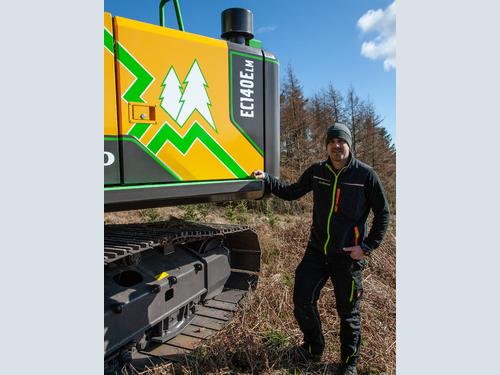 Replacing his first EC140ELM purchased three years ago, Ben’s new charge is certainly a one-off, after making a long list of modifications and alterations to the standard factory offering to satisfy his stringent requirements. “The original machine performed almost faultlessly over 5,500 hours with just a small ad-blue issue and a tracking fault occurring towards the end of my tenure with it and in fact, both issues where easily resolved,” comments Ben. “The residual value in the machine was equally impressive, so opting for a second Volvo was really a no- brainer.”

The standard EC140ELM has been equipped with 900mm wide pads which is crucial for the bulk of the contracts and work Ben undertakes on private estates and large scale commercial forests, building and repairing forest roads and tracks and ‘mounding’ for the planting of new saplings.  Additional skid rails have been added to the bottom of the undercarriage to support the track frame when tracking over old tree stumps and rock. At the business end, Ben has chosen the two-piece boom option and the shorter 2.5m dipper arm to facilitate the fitting of an X20 Steelwrist tiltrotator. “Opting for the larger X20 on this size of machine was a gamble but so far it’s paying off. It’s just a case of getting used to the little extra weight at the front end, but this is more than compensated by the awesome power of the gearbox on the X20 model over the smaller X18 that I had on the previous machine. It’s making a huge improvement to my daily productivity,” says Ben.

Most of the additional physical alterations have been undertaken by Gifford-based Lammer Engineering, the proprietor of which happens to be Ben’s father. The modifications include additional skid rails mounted under the centre of the chassis to protect from tree stumps; side impact protection rails; a heavy duty roof guard and guarding at the bottom of the windscreen; boom cylinder guarding which sports Ben’s new BM Excavations logo; guarding to the hydraulic connections along the dipper arm and a guard mounted at the top of the dipper to protect from damage from tree branches. The standard windscreen has been replaced by bullet-proof non-scratch glass to withstand debris being thrown at the cab when using a flail and, to finish the machine off, Ben has had the machine’s grab rails and steps painted in high visibility green to facilitate safe access and egress in low light.

The EC140E itself is powered by four-cylinder Stage-IV compliant Volvo engine, developing 122 nett hp, and offers the latest in engine technology and operating sophistication. For example, pump flow is controlled for combined digging and swinging operations to reduce the flow loss through the overload relief valves, whilst maintaining digging power and maximum swing torque. When Eco-mode is selected, the machine provides better fuel efficiency without loss of performance in most operating conditions. In addition, boom and arm geometry provide highly competitive digging forces and lifting capacities, which makes for faster work cycles. The combination of the 4.6m adjustable two-piece boom, 2.5m dipper arm and X20 tilrotator makes Ben Miller’s new acquisition a highly versatile piece of kit. Hose rupture valves are fitted as standard to the boom and dipper cylinders as are quick fit hydraulics and a hammer/shear service and in addition Ben has opted for x3 rotation lines and a large bore return line to facilitate attachments such as a flail, requiring high flow on the return to tank line.

Other options specified by Ben Miller include additional LED work lights mounted on the cab, boom rams, hydraulic tank and counterweight and a diesel powered heater for the machine’s cooling system and proportional controls on the multi-faceted joysticks.

Whilst Ben Miller is a pretty self-sufficient individual and quite capable of maintaining his new EC140ELM, this time around he has opted to take out a Volvo Gold full repair and maintenance contract with SMT GB which means the firm will take care of all the repairs and maintenance required for Ben’s length of ownership. “I thought long and hard about making this additional investment and decided it made sense to have the machine fully maintained and looked after by SMT, giving me that extra peace of mind,” says Ben.