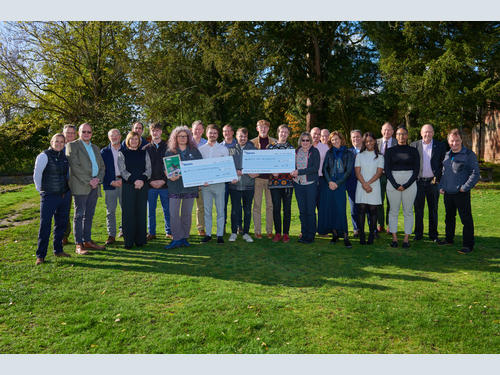 A biodiversity project carried out by a team of students from Bath Spa University at Hanson’s Masters quarry in Dorset has won the UK research stream of the Quarry Life Award 2022.

The project, which investigated the sand properties required for sand lizard breeding to inform the creation of receptor sites, claimed the £5,000 first prize at an awards ceremony held at Hanson’s former sand and gravel quarry at Middleton Hall, Tamworth.

This year is the fifth time Hanson’s parent company Heidelberg Materials has held the Quarry Life Award, which is run every three years in more than 20 countries. It aims to raise the understanding of the biodiversity value of quarrying sites during and after extraction and share new best practices.

Stewart Jones, national sustainability manager at Hanson UK, said: “The judges felt that the Bath Spa University project was robust, transferable and delivered biodiversity value to the quarry and to science.”

The Bath Spa University project also impressed the judges of the international award, winning the Habitat and Species category at the ceremony hosted by Heidelberg Materials in Brussels and scooping a further €10,000 in prize money.

Runners up in the research category were Cranfield University’s project at Grange Top quarry on improved biodiversity and carbon sequestration in soils – which was also a runner up in the Heidelberg Materials international competition – and Loughborough University for its project at Barton-under-Needwood quarry looking at sediment archives of biodiversity and pollution in the quarry lakes.

The winners of the community stream of the competition in the UK were Dunsmore Living Landscapes and St Margaret’s Primary School in Wolston, near Coventry, who claimed the £5,000 first prize for their project at Smiths Concrete’s Wolston Fields quarry to install quarry lifecycle sign boards along the quarry footpath.

“This project was a great concept to show how quarry working can be part of the community and the benefits it provides,” added Stewart Jones. “It was a truly local project involving many members of the school and local community.”

The runners up in this category were Earthwatch for its project looking at the feasibility of creating a Tiny Forest for nature recovery and education in Tytherington, South Gloucestershire, and the RSPB for its project to connect communities to their local wild greenspace at Ouse Fen Nature Reserve in Cambridgeshire through a series of enhanced circular walks.