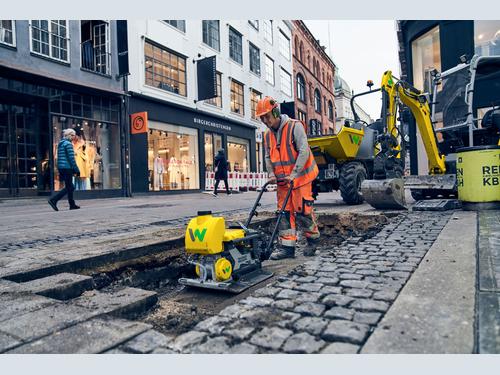 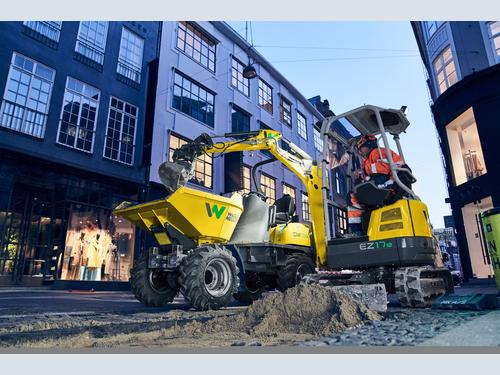 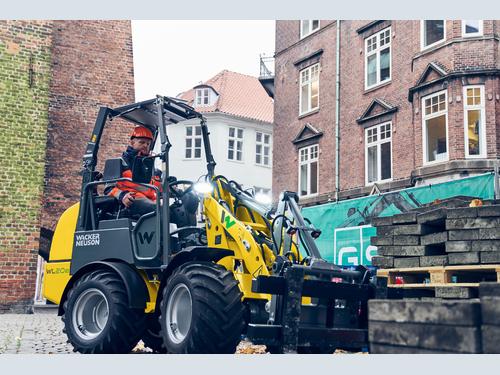 At the end of 2019, especially low-noise construction machines and units were needed for a night job site in Copenhagen’s pedestrian zone. When new cables were laid, nearly all the zero emission family by Wacker Neuson was used: from the battery-powered vibratory rammer to the electric wheel loader all the way to the mini-excavator EZ17e...

No compromises despite their emission-free working principle – this is the promise of zero emission solutions by Wacker Neuson. They proved this in the inner city of Copenhagen at the end of 2019. Here, new cables were laid in the pedestrian zone. The work was carried out predominantly at night and early in the morning, to prevent restrictions during shop opening hours and in order not to disturb area residents.

Using the zero emission line by Wacker Neuson, the entire construction site was operated fully emission-free and with very low noise levels: the city of Copenhagen’s noise measurements recorded no noise emissions of any kind produced by the zero emission products – only garbage trucks with conventional engines driving past produced measurable values.

“Due to the intensifying question of emissions, in particular within the inner city area, and increasingly economical solutions, we are seeing an increasing demand for emission-free solutions,” says Alexander Greschner, CSO of the Wacker Neuson Group. “Five years ago, we introduced a world’s first with our battery-powered rammer and, since then, have kept expanding our portfolio of emission-free machines, which in the meantime includes 13 products in total for the construction industry.”

An entire process – fully emission-free
The GSV rental park in Denmark provided the executing contracting company with zero emission products by Wacker Neuson. Peter Fritzbøger, head of sales and marketing at GSV, says about the solutions by Wacker Neuson: “Our experience shows that zero emission machines are easy to operate, require no special training and work exactly as reliably as conventional machines.” First, the paving stones in the Copenhagen inner city were broken up with the fully electric zero tail excavator EZ17e; then, the soil was excavated. At no point did the rear protrude over the undercarriage, thanks to the compact design. The 1.5 metric ton excavator is in no way inferior to fuel-operated mini-excavators of the same class: All hydraulic functions possess the same performance as the conventional models. Thanks to intelligent charge management, the excavator EZ17e can be used battery-operated with full flexibility, whereby the charge capacity is sufficient for an average workday. The excavator is also chargeable during operation, as the machine can be charged during stationary activities, such as for example interior demolition. The battery can be charged via a normal household power outlet (110-230 volts). In addition, fast charging with high voltage current in only four hours is also possible.

The excavated material was transported away using the electric wheel dumper DW15e with 1.5-metric ton payload. The dumper is equipped with an electric motor for the drive system and another motor for the work hydraulics, in order to appropriately and independently take on output as needed and minimize energy consumption. When braking the machine or when driving downhill, the energy is fed back into the battery and used to charge the battery. The maintenance-free battery is delivered with an integrated battery charger that can be plugged in easily at the charging station. Moreover, the wheel loader WL20e was used for material transport on the construction site. It has a bucket capacity of 0.2 cubic meters and comes equipped as standard with a high-quality AGM (Absorbent Glass Mat) battery, which is characterized by particularly easy handling and low maintenance effort.

After the cables were laid in the pedestrian zone, the ground was compacted with a battery-powered vibratory rammer and a vibratory plate. For larger areas, the battery-powered vibratory plate AP1850e was used, for confined spaces the battery-powered rammer AS50e. Both can be operated with the same lithium-ion battery, which is deployable as a module and can be changed in no time. This battery was specially conceived for the hard work conditions of the construction industry and delivers energy sufficient for all the work that compaction equipment needs to perform on an average workday.

Zero emissions is gaining importance
Increasing numbers of cities are considering stricter emissions limits; this also applies to Copenhagen. “There are as yet no rules or regulations, but we would like to implement regulations in Copenhagen in the next few years. To that effect, we regard global co-operation between cities, as well as co-operation with the industry, as necessary,” explains Jørgen Abildgaard, director of the city of Copenhagen’s climate program.