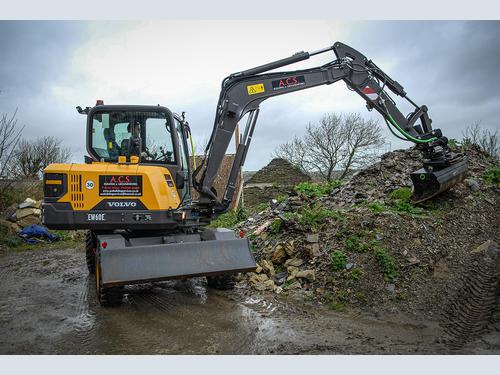 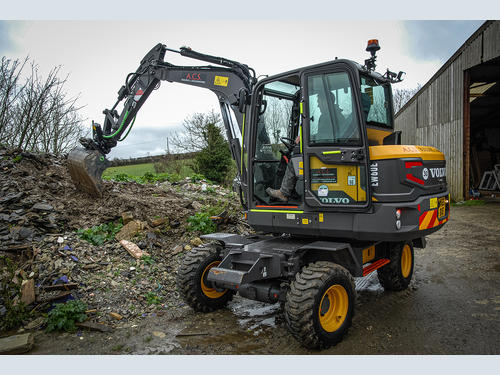 The six tonne machine has been supplied by Plant & Engineering Services, SMT GB’s utility dealer for the Southwest of England, following an impressive demonstration. It proved to be just the ticket for proprietor Arron Shurvell. “I’ve previously operated other tracked compact machines, but wanted better mobility and a larger six tonne sized machine, so the Volvo EW60E appeared to fit the bill,” says Arron. “Having the machine on demonstration convinced me that this was the way to go. I really liked the all-round performance, the geometry of the equipment and the machine’s stability,” he continues.

Equipped with Volvo’s powerful Stage V engine, delivering 61 nett hp, the six tonne EW60E features an adjustable hydraulic flow, in addition to a well-balanced driveline for optimum performance, whether working on a jobsite or on the move. With its 2.9m boom and a choice of either the 1.6m or 1.9m dipper arm, the EW60E boasts generous working ranges for a machine of this size. The maximum forward reach ranges between 5.81m and 6.11m, while its maximum dig depth is 3.29m to 3.59m. Its practical load over height is 4.44 to 4.67m which, coupled to a minimum front swing radius of just 2.35m, means the machine can work in very confined spaces.

Permanent four wheel drive is provided by one large variable axial piston motor and a two-step power shift gear box, giving a maximum speed of 30kph and a maximum tractive effort of 29kN. This makes the EW60E highly versatile both on and off road.

The EW60E is also equipped with a number of other additional features, which are designed to maximise the machine’s uptime and availability. For example, access to the machine’s service points is carried out at ground level, and greasing points are conveniently grouped together. Service intervals can easily be monitored via the in-cab screen, which shows reminders of when maintenance is required. The machine comes with an auto idle feature as standard, whereby the engine stops automatically after a preselected idle time, lowering fuel costs and reducing excessive noise pollution.

As with all Volvo compact excavators, the EW60E comes fitted with hammer/shear hydraulic lines as standard. In addition, hose rupture valves are fitted to both the boom and dipper cylinders as standard feature as well. Other hydraulic functions such as a grab rotation circuit, hydraulic quick fit lines and lines for hand held tools can also be added as optional extras.

To add to the machine’s versatility, Aaron Shurvell has added a Steelwrist tilt rotator to his EW60E. “This is the first time I’ve taken a tilt rotator on a machine, and the benefits of having one are already paying off. It makes the machine so much more versatile for digging, profiling and even loading or unloading palletised material,” says Aaron.