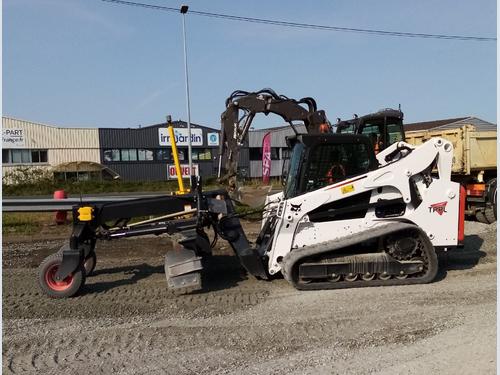 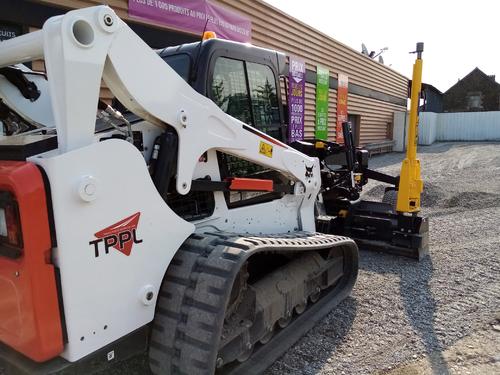 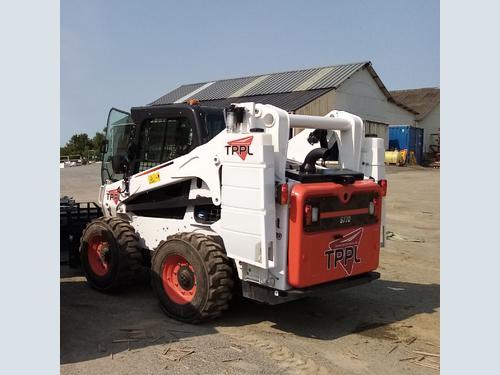 Between Paris and the Atlantic coast, the Pays de la Loire region offers vast undulating expanses of which more than 40% is occupied by forests and meadows crossed by two major rivers - the Loire and the Sarthe - and several wetlands. The region includes part of the Loire Valley, renowned for its vineyards and castles...

Sébastien Kueny, TPPL's fleet manager, is responsible for the purchase of the new Bobcat loaders: "The decision to strengthen our fleet with two new Bobcat loaders is first a response to our need for versatile machines. We have never had Bobcat machines before but with more than 800 job sites per year, we are now called upon to work on all types of jobs in all types of configurations. The wide range of attachments available for these loaders and the simplicity with which it is possible to switch between them gives us a real boost in terms of efficiency on our job sites.”

For use with the two new Bobcat T770 and S770 models, TPPL has purchased fork, bucket, planer (usable on both models), grader (for the T770 model), plus trencher attachments. Additional attachments will be added to the range in 2020. "The manoeuvrability, precision and efficiency of Bobcat compact loaders allow us to get smaller jobs done more quickly. We work faster, we save on working time. We also save fuel, and we get jobs done more accurately. At the end of the day everyone wins, TPPL as well as its customers," concludes Sébastien Kueny.

At the heart of the Pays de la Loire region, TPPL is one of the major players in public works.

With nearly 400 employees and a fleet of 360 different machines and equipment, TPPL carries out work on more than 800 construction sites and infrastructure works per year: including roads, housing estates, industrial and commercial sites, urban development, tramways, etc.

Olivier Durand has been a machinery operator at TPPL for 12 years (2008). He has been working exclusively on graders for seven years, including the new T770 model.

"Thanks to the compact size and manoeuvrability of this Bobcat loader, I am between 30% and 50% faster on grading work compared to the old grader I used before.

"The handling is extremely easy and enjoyable. The steering is intuitive and precise. I am able to get my bearings very quickly. The versatility is also very convenient. With the various attachments that are easily interchangeable - grader, bucket, forks - I can do different tasks much faster than before," says Olivier Durand. "The low engine noise is also very valuable when you're sitting all day right above it. Visibility is good. The T770 is also equipped with a reversing camera that works very well from all angles."

"I now work on grading jobs with accuracies of less than 5 mm or even close to zero, without any mistakes. This is a considerable time saving with customer satisfaction close to 100%. We work almost exclusively on small jobs, but we achieve a lot. So we have to be able to go fast, precisely and move quickly from one job to another so we stick to our schedule.”

TPPL has purchased a new Bobcat S770 skid-steer loader equipped with a planer attachment, a water spraying system and a road kit (rear and front lights, turning signals and mirrors).

For all road repair work, but also for other types of urban works such as pipe trenching, fibre optics and other network types, as well as repair of deteriorated pavements, TPPL has chosen a Bobcat skid-steer loader for the first time.

"The surfacing and planing work we carry out requires more and more precision and manoeuvrability. That's why we chose the Bobcat S770 model. The self-levelling planer attachment maintains a constant planing depth, regardless of the position of the planer," explains Sébastien Kueny.

In addition, TPPL has had this skid-steer loader equipped with a water spraying system with two 50-litre tanks on either side at the rear of the machine.

"This allows us to moisten the surface before planing, in order to soften it and get a much better asphalt penetration, but also to limit the formation of dust clouds. This allows us to preserve the air quality around the work area. This is important for our staff but also for the neighbourhoods when we work in urban areas, which is often the case." says Sébastien Kueny.

For all work on roads or in urban areas, the S770 is also equipped with a rear-view camera so that it can operate in traffic.

TPPL has only been using Bobcat compact loaders for six months, but they have already established themselves as an indispensable complement to the rest of the machine fleet of this regional leader.

According to Sébastien Kueny, the compactness and precision of Bobcat loaders allow for impeccable quality finishes. They also save precious time. In the region, the trend is towards small or medium-sized construction sites and demand is growing. "We are doing more and more precision jobs. So we need machines that can work quickly and well. Bobcat compact loaders are the perfect answer for these new requirements. We will first of all expand the attachments available for use on each loader, and we are already planning to acquire new ones soon.”

In 2019, TIPMAT received the Bobcat Customer Retention and After Sales Service Excellence Award for France.

With more than 300 different models in its catalogue, TIPMAT answers all needs for construction and agricultural equipment. The company is particularly recognized and appreciated by professionals in the region for the quality of its aftersales service.

With a complete and responsive spare parts delivery service and around thirty specialized technicians, on the road or in workshops, the TIPMAT teams offer service, maintenance and repair of all machines, enabling Bobcat to set the standard in terms of quality and reliability.

The versatility of Bobcat machines is well suited to the diversity of the region's construction sites. Angers and Nantes are two cities with a natural geography that revolves around the River Loire and where businesses are extremely versatile: agriculture, forestry, mining, livestock farming, logistics, food processing, industry, shipbuilding, construction and public works, regional planning, etc. It is therefore no coincidence that TIPMAT, the leading Bobcat/Doosan machine dealer and distributor in the West of France, has been based here since its beginnings.

"Bobcat. The Bobcat! Whether tracked or wheeled, in the Pays de la Loire region, the brand's compact loaders have become so popular that everyone calls them 'Bobcat' even if they are of another brand," says Victor Voisin, local sales manager at TIPMAT.