Taman Seaport: after the major contract now one of the largest Spare Parts orders ever for SCHADE 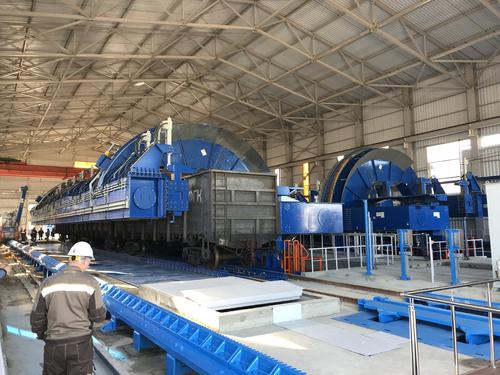 In October 2019, in the presence of the Russian President Vladimir Putin, the first of two coal and iron ore handling lines was commissioned at the new Taman Seaport built by the Russian company OTEKO-Portservice, in the Krasnodar Region on the Black Sea. As part of a large order for this project, SCHADE Lagertechnik GmbH of Gelsenkirchen supplied a system which unloads three wagons at a time, with each of the two Triple C-Frame Wagon Tipplers working in parallel. Now OTEKO has placed a very substantial spare parts order with SCHADE...

SCHADE’s customer OTEKO attaches great importance to having the Wagon Tipplers in operation as permanently as possible, and has therefore placed its spare parts order for strategically important components such as gearboxes, as well as for consumables essential for operative requirements, for example the hydraulic systems. Deliveries will be made in various lots from the second half of 2020 to the first quarter of 2021.

The two commissioned Triple C-Frame Wagon Tipplers, with unloading capacities of 60 wagons per hour each, are part of the largest order so far in the history of SCHADE Lagertechnik. The scope of supply also includes four Semi-Portal Reclaimers and three more Wagon Unloading Systems, two of which are C-Frame Wagon Tipplers for coal and iron ore, and a Pivot Frame Wagon Tippler to be used for handling sulphur.

Taman Seaport has been extended in recent years by OTEKO-Portservice to become the second largest freight handling port in the southern part of Russia. By the end of 2021 it is planned that further terminals will be established at this geographically significant freight hub, located between the Sea of Asov and the Black Sea.