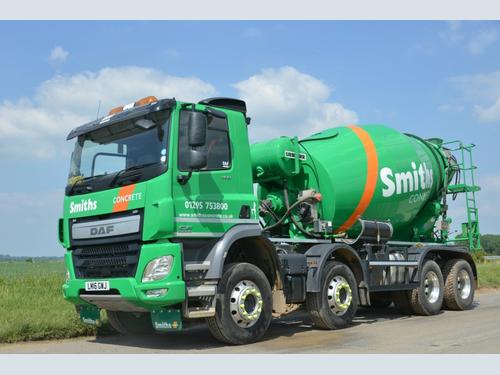 Smiths Concrete, a Hanson Group company, has a new management team and scheduled replacement scheme for mixer trucks and bodies. Having made the decision to bring the fleet under a single manufacturer for each piece of equipment, Smiths Concrete has chosen Liebherr to supply its mixer drums, most recently purchasing Liebherr 804 drums with a carrying capacity of just under 8 m3.

Hanson Group company, Banbury-headquartered Smiths Concrete, operates throughout the Oxfordshire region with six satellite depots supplying in excess of 800 m3 of concrete per day.
Now trading for almost 60 years, the company has grown to be one of the largest independent suppliers of ready mixed concrete and mortars in the area with all batching plants QSRMC accredited.

Currently running a mixed fleet of trucks and mixer bodies, Smiths Concrete has come out of the recession with a new management team and a scheduled replacement scheme in place. Transport Manager Paul Simpson explains, “In the past the company has taken the approach of keeping trucks and bodies for a number of years with purchases being made from a number of manufacturers. Although this has worked to a certain extent, lack of commonality between parts and service levels from the various manufacturers has not helped us obtain the level of service we expect from suppliers.”

The decision was made to source both truck chassis and mixer bodies from single suppliers in a bid to bring the fleet under a single manufacturer for each piece of equipment.
“We have always run Liebherr drums and found them to be extremely well made and durable,” said Paul. “Liebherr drums have caused us very little in the way of problems, although long lead times and the availability of ready-to-go outfits from all manufacturers led to the fleet being made up from a variety of manufacturers, sometimes not ideally suited to our work.”

Things have changed with the new management team in place and a focused replacement scheme under way. DAF chassis are now the choice for the carrier vehicle with Liebherr in the driving seat for supplying mixer drums. “As part of the Hanson Group we are required to specify our vehicles to their standards and this includes the fitment of quick-release hatches to the mixer drums,” explains Paul. “The Liebherr system is by far the better and simpler solution and although we had a few niggly issues with the seal on the first example to enter service, the response from Liebherr and its team has been what we expected from such a large and professional company.”

The company is currently running a fleet of 29 trucks throughout the region and its latest purchases are Liebherr 804 drums with a carrying capacity of just under 8 m3. The drums, which join other 804 drums and a number of smaller 6 m3 capacity 704 drums on the fleet, are seen by both management and drivers as far superior to anything else the company has. The high specification mixer drums come complete with electronic mixing and discharge controls to make the driver’s life a little easier.

The Liebherr drums are the first to have such a system and early reports are very positive from an operational and servicing point of view. The lightweight drums on the Liebherr are seen as ideal and combine good carrying capacity with superior longevity compared to rival makes. “The Liebherr mixers are almost so good that we can fit them and forget them,” jokes Paul. “We check them every six months and, apart from early seal issues, they have been exemplary. When we have had to call Liebherr to deal with an issue, it has been dealt with quickly and effectively. We know they aren’t the cheapest mixer on the market but that small increase in purchase price is soon forgotten with the low cost of overall ownership.”

Operating a one-truck, one-driver system gives the drivers ownership of their vehicles, which results in an immaculately turned out fleet. “We like to think we look after our drivers and, in return, they look after the vehicles,” Paul Simpson comments. “We are aiming to replace three vehicles per year and to keep them on the fleet for up to 10 years, depending on the mileage and reliability of the chassis,” he concludes.