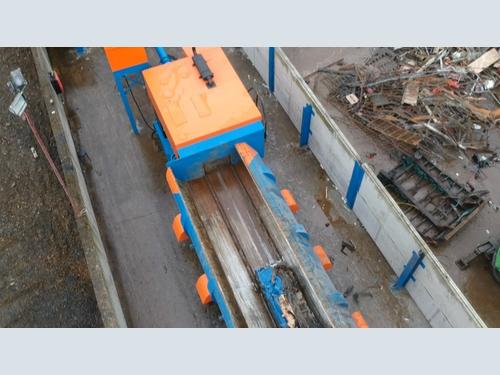 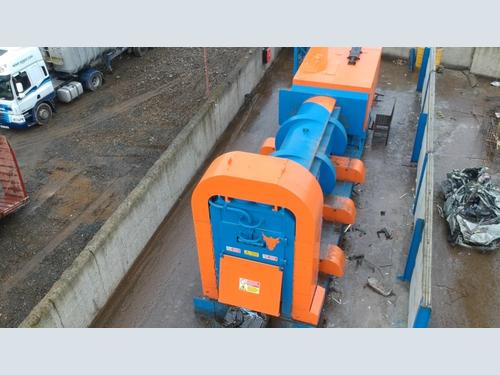 Shortt Recycling, a family run business with a long heritage in scrap metal recycling, have been the first company in the UK and Ireland to purchase a Taurus Shear Baler from Blue Group, after doing the deal with Blue Equipment Ireland.

The scrap specialists who are located in Armagh, Northern Ireland have purchased the ACH773 shear baler to process the numerous types of both ferrous and non-ferrous metals that comes in from across both Northern Ireland and the Republic. The Shortt family have been in the scrap metal business for many years. Presently the company is headed up by father Jim and son Anthony.

The TAURUS ACH773 is a shear baler which is built on a single piece frame, eliminating the requirement for expensive foundations. As with all models in the ACH range, the 773 incorporates the original TAURUS BLULINE twin “swinging wings system” with over stroke function on both wings. The over stroke function increases the density of the scrap metal while also significantly minimizing frictional wear within the squeeze box. The internal surface of the squeeze box, as well as the internal and external surfaces of the wings, is comprised of wear resistant Swedish Hardox steel, which is notably thicker than competitor machines in its class.

A further feature of these industry leading machines is how well the vital components of the shear baler are protected, being housed in metal casing. Furthermore the shear blades offer ‘4 turns’ rather than the standard 2, meaning the wear parts last much longer, which obviously reduces ongoing costs.

The machine is already proving its worth as an integral part of the site after just a few weeks, producing up to 20 tonnes of bales per hour. It isn’t however just it’s processing power that is impressing Anthony Shortt, as he commented, “We take in all different kinds of scrap as we pride ourselves on offering a wide range of services to our customers. The baler, with its advanced remote control system means it can go from producing bales to shearing heavy scrap consisting of different lengths to suit the different needs of our consumers within a few seconds and without moving from my cab.”

The build quality of the equipment is also immediately obvious, with there being no vibrations or movement, even when the shear baler is dealing with really heavy scrap. In fact, previously the company had to pre-treat much of the heavy scrap that came in, whereas now, the baler can handle everything making the yard much more efficient.

The machine which has three cylinders on both wings, offering an impressive 400 tonnes of force each, was built within less than a week at the yard, with TAURUS sending over a specialist engineer to work with those from Blue Ireland. Describing the support received from TAURUS, Anthony said, “We did have a few teething problems after the engineer left, but I called them up and they were able to connect remotely to do some fine tuning. What was really impressive though was that they are 3 hours in front and the engineer was at home having finished for the day, but it wasn’t a problem and he sorted everything out there and then”

The TAURUS Bluline, range of shear balers as well as the Blackline shear balers and Redline scrap pre-shredders are available in the UK and Ireland exclusively through Blue Group.

Liam Brophy, Sales Director at Blue Ireland also commented, “Shortts are a very forward thinking business, always looking for ways to support their customer base and make their business more efficient and productive. As we would expect, they carefully analysed the shear baler market before purchase, illustrating the superior quality of TAURUS as it was their equipment that came out on top.”