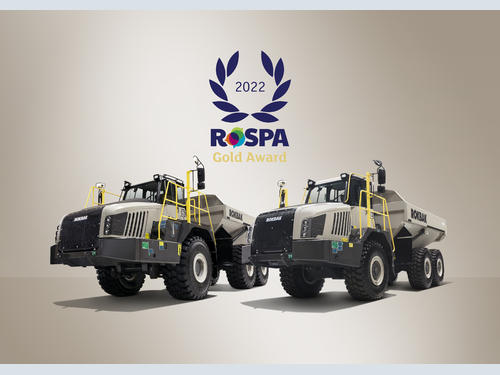 Rokbak is celebrating its second RoSPA Gold Award in a row for achieving the highest standards in health and safety.

Rokbak has received a RoSPA Gold Health and Safety Award for the steps it has taken to ensure its employees get home safely to their families at the end of every working day. This is the company’s second successive Gold Award – the previous one being received last year, when it was still known as Terex Trucks, following on from four successive years of Silver Awards.

Organisations receiving a RoSPA Award are recognised as being world-leaders in health and safety. Every year, around 2,000 entrants apply to achieve the highest possible accolade in what is the UK’s longest-running health and safety industry awards.

With safety being deeply embedded in both the Rokbak and parent company Volvo Group’s philosophy, the spate of these awards highlights the many improvements made at Rokbak’s Motherwell manufacturing site and in the training and welfare of its employees since the acquisition of Terex Trucks in 2014.

“Health and safety has always been a priority for us so we are thrilled to be recognised with a gold award from RoSPA,” says Paul Douglas, Rokbak’s Managing Director. “We’ve had a busy year with the rebrand and the various updates and changes that came with that, as well as lots of new team members on the shop floor, so to hold firm and win our sixth consecutive award is a fantastic result. This achievement is a testament to the whole team, their efforts have ensured our working environment remains a safe place.”

“This is a fantastic and well-deserved accomplishment,” concludes Julia Small, RoSPA’s Achievements Director. “All our award entrants demonstrate their unwavering commitment and passion for keeping people safe at work. By receiving this recognition, Rokbak joins like-minded businesses and organisations worldwide, who represent the very best in their approach to health and safety. I would like to add my personal thanks for all the work that it has taken to secure this well-deserved award – congratulations to all those involved, who champion and drive up health and safety standards every day. You are a fantastic example to others in your sector.”