Rokbak rewards two US representatives with Dealer of the Year accolade 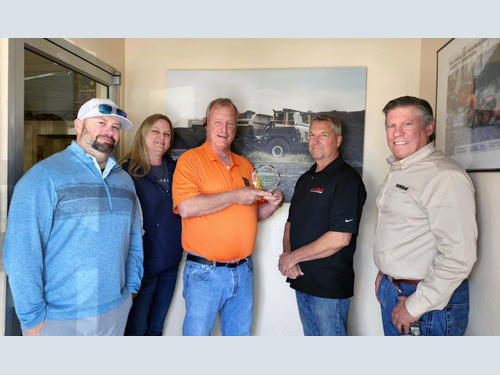 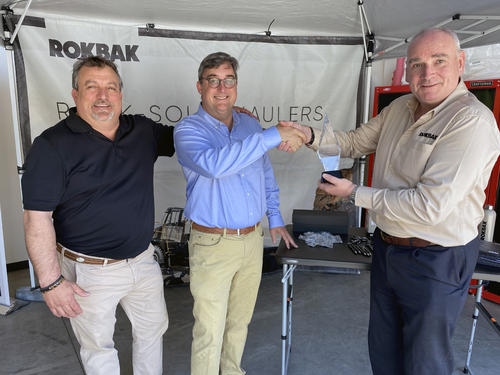 For the first time, Rokbak’s Dealer of the Year award has been split in recognition of volume and market share, with the two winning dealers in Nevada and the Carolinas highlighting the buoyant state of the market throughout North America...

Rokbak’s Dealer of the Year award has been presented to two companies – and, perhaps unsurprisingly, given the surge in North American demand for articulated haulers, both of them are in the USA. This time, the award was split into two categories, covering Highest Volume and Highest Market Share, which were won by Hills Machinery and Shafer Equipment Company respectively.

“Hills and Shafer both performed exceptionally well last year,” says Robert Franklin, Director of Sales, Americas. “These two Rokbak representatives in the Lower 48 could hardly be any further apart, geographically speaking, and their client base is pretty different too – but they both share our determination to increase our customers’ productivity and profitability with the most efficient, reliable haulers on the market.”

Serving north-western Nevada and north-eastern California from its base in Sparks, NV, Shafer Equipment Company’s (SEC) award for Highest Market Share in 2021 comes in response to the dramatic 40% growth in its hauler business over 2020’s total. As a Rokbak / Terex Trucks dealer for the past nine years, company President Jay Shafer usually presides over a predominantly rentals-based market but explained that sales rose to claim an equivalent share last year.

“Probably half of that growth can be attributed to several large projects, with the rest being largely down to the good old-fashioned hard work of our sales team – which has also increased demand for rentals, parts and services,” says Jay.

“The market out here is evenly distributed between commercial building and residential projects, but definitely favours the bigger RA40 machines due to our wide open spaces. Our customers are hauling huge quantities of dirt and, as development spreads towards the foothills of the Sierra Nevada, scrapers are no longer effective due to the underground rock.”

Given the nature of that terrain, SEC has received a great deal of enthusiastic feedback from customers regarding the drivetrain used in Rokbak’s RA40 haulers. With an engine exhaust brake and the Allison transmission’s integral retarder, downhill runs can be finely controlled for maximum safety, before the lean-burning 444 hp (331 kW) Scania DC13 engine powers the machine back up the hill for the next load.

“The performance and reliability of these haulers have been critical in attracting new customers,” confirms Jay. “And our customers appreciate that we have a very good support team on hand to take care of their service and maintenance needs.”

RA30 dominates in the Carolinas

In contrast, Hills Machinery, which serves customers from seven locations across North and South Carolina, can attribute much of the reason for its success in the Highest Volume category to the local contractors’ preference for the RA30. And unlike SEC, it frequently sells just as many articulated haulers as it rents.

Continuing strong demand from housing, commercial, industrial and heavy highway projects throughout the Carolinas secured Hills the trophy. For Hills, the 28-tonne (30.9 USt) RA30 is the dominant hauler largely in response to the size of the machines its customers have available for loading.

“Land clearing and road building are the most popular applications for these machines right now,” explains Jim Hills, Co-founder and President of Hills Machinery. “This is one of the fastest-growing housing markets in the country, and lots of infrastructure work needs to be done to keep up with the growth, so we hope this will help us expand our footprint even further.”

“We began working with Rokbak / Terex Trucks in 2018. Our customers love the comfort and performance of the Rokbak haulers, but most of all they appreciate how ridiculously reliable they are.

“The interface between price and quality has hit a real sweet spot, offering premium performance without the premium price. In fact, the machines have improved so much, I think the rebrand was necessary to highlight all that – and our customers love the new branding too.”

Offering operator training, same-day parts delivery and on-site service 24 hours a day, seven days a week, Hills Machinery’s commitment to customer service highlights its immense value to Rokbak in the midst of a booming market for articulated haulers. Likewise, SEC’s customers have a direct line to Jay Shafer at any time, day or night, with any issue becoming a cause for concern for his entire company – rather than just one specific department – until it is rectified.

“With half of worldwide articulated hauler production expected to end up in North America this year, a strong relationship with the region’s most capable dealers is the cornerstone of our strategy to ensure we can provide this market with the level of support our customers demand,” concludes Robert. “Hills and Shafer are both experienced dealers with excellent market, product and application knowledge, and they do whatever it takes to satisfy customer needs. They are committed to delivering the best products together with the best customer support, and I think that’s the secret to their success.”