Recycling is still the future 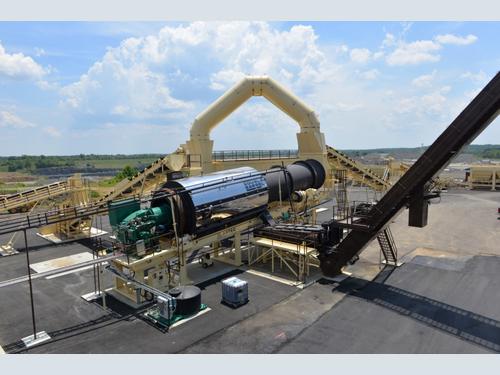 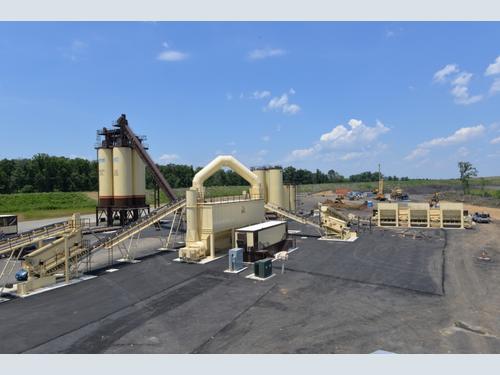 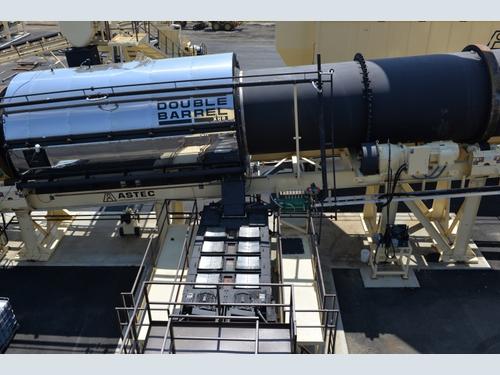 Andrew Pettingale, MD of BG Europa (UK) Ltd, examines the latest options for the processing and mixing of RAP in asphalt production.

Recycled asphalt (RAP) is a particularly valuable material to the asphalt production industry and its value will continue to increase as the cost of virgin aggregate and bitumen rise. Producers who can supply high quality mixes with RAP with minimum energy usage and minimum environmental impact will be best prepared to compete in future markets.

Producers must understand that RAP is not a waste product. Like a quarry or oil well, roads are another source of aggregate and bitumen. From an economic standpoint, RAP is worth the virgin material it replaces ton for ton. When properly processed and mixed, RAP can also significantly reduce the cost of asphalt production. RAP has the added advantage of conserving natural resources and providing more miles of pavement from available revenues. If recycle is processed and treated the same as virgin materials with respect to gradation control, mixes with high levels of RAP have been shown to match or exceed the performance expectations of all-virgin asphalt.

Because processing techniques have been refined and higher percentages of recycle are commonly used in mixes, plant equipment must be able to cleanly and efficiently produce the
mixes. The amount of RAP, the type of plant and the equipment configuration can affect production capacities, plant operating costs and the quality of the mix.

0 to 20% RAP
When producing mixes using between 0 and 10% recycle, the percentage of RAP is so low that it has little effect on the aggregate gradation and bitumen content in the mix. When fed into a continuous mix asphalt facility or a batch plant, RAP should be a milled or crushed material that is conveyed over an appropriate scalping screen to prevent oversized material from entering the mix.

When using amounts as low as 10% recycle, RAP can be successfully fed into batch plants on a continuous basis using a bucket elevator. When higher percentages of RAP are fed to the elevator screen blinding can occur as bitumen rich fine material adheres to the wire of the smaller aperture screen mesh.

Batch plants are often converted to allow the use of more RAP. In these plants, the
aggregate is superheated in the dryer and held within the hot stone bin as an energy store for the drying and heating of the cold wet RAP. The recycle is fed directly into the pugmill with the superheated aggregate where the RAP quenches the aggregate, dries and achieves final mix temperature. Bitumen is then injected and the RAP / virgin aggregate mix coated.

When running RAP through a parallel flow drum or batch plant, it is imperative to keep the recycle as dry as possible to prevent excessive stack emissions. The steam from the drying process can strip the light oil from the virgin bitumen which can oil-soak the baghouse and
lead to odour and visible emissions.

As the percentage of RAP increases in batch plants, operators must consider the steam created as the RAP is heated by the hot virgin aggregate during the mixing process. Since steam is generated almost instantly upon mixing RAP with virgin aggregate, the large volumes of steam from wet recycle usually overwhelms batch plant scavenge systems. A RAP feed system that controls and extends the time of RAP introduction into the pugmill should be used to give the scavenge system more time to evacuate the steam. Keeping the recycle as dry as possible reduces the total volume of steam generated and also reduces drying cost.

20 to 30% RAP
Proper management of material gradation is the key to producing high quality, high RAP-content mixes. Most existing asphalt facilities have numerous virgin cold feed bins and only one or occasionally two recycle bins. When using RAP at 20% and higher, the recycle material should be separated into the same sizes as the virgin aggregate. By having the same gradation of both the virgin rock (white rock) and RAP (black rock), the mix designer can simply choose the gradation of the desired mix then select either black or white rock. This gives the mix designer substantially more flexibility, and it allows for the use of RAP in virtually all mixes.

More importantly, treating recycle gradation similarly to virgin aggregates minimizes variation in both mix gradation and bitumen content that may occur if a recycle material containing a broad gradation range is fed from a single bin. As a RAP bin containing such material depletes, there is a significant potential for segregation. This segregation can have a significant effect on gradation, bitumen content and mix quality and longevity.

Towards 30% RAP, traditional methods of cold RAP addition within batch mixes become unachievable as the level of superheating of the virgin aggregates becomes too great and steam evacuation becomes extremely problematic. As virgin aggregate temperatures increase they can near the flash point of bitumen, in the event of RAP feed failure and sufficient quenching of the mixer charge the likelihood of mixer fire becomes significant.

30 to 40% RAP
In most plants, the recycle material is heated and melted by transferring energy from superheated virgin aggregate to the recycle material. As the RAP addition and/or moisture content increases, the level of virgin aggregate superheating required also increases so as to provide sufficient energy to dry and heat the RAP to mix temperature.

As the level of superheat increases the amount of heat loss from a counterflow virgin aggregate dryer increases considerably. As RAP content increases, the heat loss and the additional fuel required significantly increase production costs.

At 30% RAP addition, a method of direct RAP heating is often utilized. However, this type of equipment has been associated with issues of environmental pollution, odour complaints, and fire risks. RAP dryers can be utilised to dry and warm the RAP reducing the level of superheating of the virgin aggregate required when directly compared to cold wet RAP a given addition rates. These drums are often installed at high level adjacent to the batch tower to allow warm RAP to flow by gravity to the mixing process. However, these dryers can be particularly polluting as without abatement blue smoke generated by the drying process can escape the dryer and pass into and through the fabric filter. Light oils which can be stripped from the bitumen contained within the RAP, can also pass into the filter, oil-soaking the bags and producing odour and visible emissions from the stack.

When using more specialized equipment like the Astec Double Barrel dryer/mixer or a counterflow dryer which incorporates an integrated RAP heater such as the Double Barrel X or Double Barrel XHR, environmental issues are practically eliminated. This is because the RAP is heated in a relatively inert environment. The steam generated by heating the RAP, the bane of the batch process, is utilized to create an inert blanket covering the mixing process. Due to the internal configuration, any incidental emissions are consumed by the burner flame. Fortunately, this internal configuration also directs heat back into the mix that would otherwise be lost.

40 to 50% RAP
As the RAP content in mixes increases it becomes more important that the recycle must be processed and fed from multiple bins to control the gradation of the RAP and ultimately mixed product. As RAP percentages increase the energy burden on the superheated aggregate increases as a smaller quantity by weight has to dry and heat the RAP. The Double Barrel and its derivatives the Double Barrel X and Double Barrel XHR are ideal for running high RAP-content mixes because of a long mixing chamber and the ability to capture heat from the drying chamber. With appropriately outfitted equipment of this type, fuel consumption remains virtually unchanged whether the plant is running 50% RAP or all-virgin mixes.

Within the Double Barrel mixing chamber, the RAP is gently mixed with the superheated virgin aggregate maximising heat and binder transfer between RAP and virgin aggregate. The steam released by this process displaces the oxygen with the chamber producing a rarefied oxygen atmosphere. This results in practically no oxidation of the mix whilst in the mixing chamber and provides sufficient time for RAP bitumen to fully melt and transfer to the virgin aggregate prior to the injection of virgin bitumen.

When only short mixing times are possible with traditional equipment, mixes with high contents of RAP can fail to reach optimal mix temperature and fail to fully melt the RAP bitumen. At higher levels of recycle, this results in poor quality mix.”

The Double Barrel by design is clean in operation when recycling RAP at high levels, there are no odours and the stack has zero opacity. Any smoke or odour coming out of the mixing section is pulled back through holes in the inner drum. Pollutants pass directly into the flame of the burner where they are consumed. Moreover, virgin bitumen and recycle materials are not exposed to hot gases and steam produced by drying virgin aggregate in the inner shell. So, these gases and steam cannot distil light oils from these materials.

50 to 70% RAP
At these levels only specialist equipment such as the Double Barrel and Double Barrel XHR can consistently produce high quality material, with no odour and zero opacity at the exhaust stack.

The extended opportunity for drying and RAP mixing allows the Double Barrel XHR to offer producers the opportunity to routinely produce high quality mixes with RAP additions significantly above 60%.

To achieve longevity in operation the inner drum and combustion flights of the Double Barrel XHR are fabricated from stainless steel to withstand the high temperatures associated with running at high RAP inclusions.

Recycling within the UK asphalt production industry is continuing to evolve. Development of methods of fractionating and controlling RAP products along with producers understanding and properly utilizing these methods will allow these materials to be incorporated in greater quantities to produce high-quality mixes. An understanding of the processes behind the successful incorporation of RAP enables producers to have an informed choice of equipment. The proven technology of the Astec Double Barrel and its derivatives allows recycled asphalt products to be introduced into mixes in a cost-effective manner and without environmental impact. As the demand for RAP increases, producers who can most successfully incorporate this valuable commodity with minimum energy usage in an increasingly environmentally aware culture will ensure asphalt recycling is a significant part of a sustainable future.