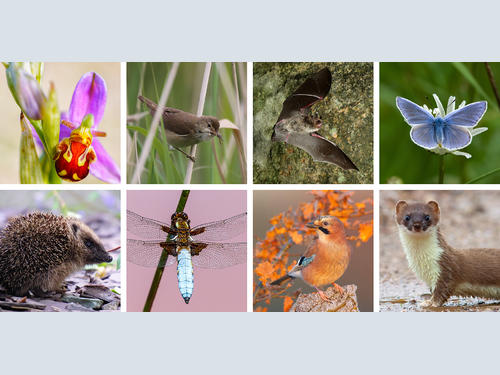 The Mineral Products Association (MPA) is counting down to Quarries & Nature 2021 this year’s 50th anniversary of the first awards celebrating the unique contribution of restored quarries to nature recovery and creating ‘net gain’.

Starting this week on Twitter and LinkedIn, each day for the next 50 days the MPA will highlight one mammal, bird, amphibian, reptile, invertebrate or plant which has flourished thanks to the restoration and ongoing management of former quarries.

The UK quarrying industry has long recognised the opportunity to enhance biodiversity through careful quarry restoration, with the first formal restoration plans devised and implemented in the 1950s.

But in 1971 the Sand and Gravel Association (SAGA), one of the predecessor organisations that merged with others to eventually form the MPA, hosted the first awards to celebrate the restoration of quarries.

However, according to the MPA, to this day the unique and significant role that quarry restoration plays in long-term nature recovery and conservation remains one of the industry’s best kept secrets although recognition has been growing in recent years as biodiversity concerns increase.

“Maybe that’s because by the time a well-restored quarry scheme has come to fruition, most people have forgotten that the site once provided the essential materials for the places where they live, work and play,” said Mark Russell, MPA Executive Director.

“In fact, the chances are that your local nature reserve is the result of mineral extraction, as are many of the UK’s flagship conservation parks. For example, in England alone there are over 2,000 quarries, covering 64,000 hectares (0.1% of the country's land area) all of which will be restored after quarrying.

“Each site is an opportunity to create a new landscape, where rare and endangered, as well as the more common, species can thrive – from wetlands and reedbeds to heathland and grassland, with hedgerows and many types of woodland. In total, MPA members have already created over 83 sq km of priority habitat with a further 110 sq km pledged in approved restoration plans that’s an area equivalent to Liverpool and Nottingham combined!.”

Today more than 80 restored quarries make up the MPA’s ‘virtual’ National Nature Park which also features visistor centres, nature trails and educational facilities. Restoration work has also spawned long-standing partnerships with numerous well-known conservation organisations, many of whom take over the running of restored sites as nature reserves for all to enjoy.

This unique ability to create areas for nature to thrive has taken on a whole new perspective since the introduction of the Government’s new Environment Bill which – amongst other things – will oblige all new developments in England to deliver an overall increase – a ‘net gain’ – in biodiversity.

Mark Russell continued: “No other industry comes close to being able to achieve this – indeed, the mineral products sector was restoring land to enhance nature decades before the term ‘net gain’ was coined. No surprise then that the MPA was the first trade association to publish a biodiversity strategy in 2009 and has recently update it.

“So in October the MPA will celebrate 50 years since the industry’s first restoration awards at Quarries & Nature 2021, showcasing the variety of ways in which former quarries are restored for the benefit of wildlife and people alike. It’s essential for the sector to recognise the exceptional achievements to date and celebrate the quarry managers, planning managers, restoration managers and their teams who continue to deliver a longstanding legacy.”