Permanent solution to pivot wear with the Expander bolt 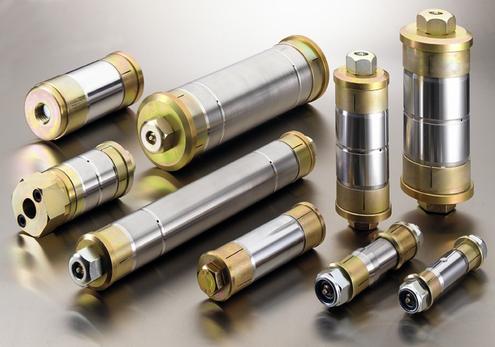 If you’ve noticed excessive noise and vibration on a machine and identified the reason as being that the pivot pins have worn the holes of the lugs so that they have become oval, then you probably know what’s got to come next: either line boring of the holes or complete replacement of the lugs. Either way you’ll be looking at high repair costs and downtime, and possibly the hire of a replacement machine. And sooner or later, almost inevitably the pivot pins will work loose again.

If that sounds familiar, then you’ll doubtless be interested to know that there is an alternative solution to the problem of loose linkages in the form of the Expander Bolt, available in the UK from MST Parts Group. The Expander system enables a repair to be carried out directly in the worn mountings without welding or line boring. In use, two expanding sleeves fill the gap and connect the attaching eyes. While conventional pivot pins are only locked on one side, the Expander system locks on both sides. This gives a stronger box construction to the whole machine pivot. The sleeves expand over both ends of the tapered axle and lock securely even if the hole is worn. If the hole has worn oval the Expander system fills out the ovality and gives a secure solution without any preparatory machining.

There are countless examples of where Expander has provided a time saving and cost saving solution to the problem of combating wear. Consider for example an orange peel grab used to handle waste. Able to raise up to 5 tons in a single lift, the grab is used around the clock to transfer waste from storage bunkers to incinerators. After just a year in operation, engineers noticed instability in the arms which quickly became a ‘flapping’. At about the same time, the lubrication channels became blocked, the arms began to seize, and the first breakdown quickly followed. New shafts and bushings didn’t solve the problem. The problem was down to failed pivots in the grab. The original pivot consisted of a pin bolt design through the ‘crown’ of the arm’s two outer mounting lugs. The bolt was fixed at the centre and the arm moved over the outer ends of the fixed shaft, carried on bronze bushings. The problem was solved using Expander: a traditional box construction with stable mountings in the arm’s outer legs, pivoted by an expander bolt with a hardened steel bushing in the centre section. Engineers now calculate that they will be able to run around the clock for 10-15 years without interruptions for stoppages, with the possible exception of replacing one or two bushings.

A further example was the railway bridge over the Göta Canal in Norsholm, Sweden, which raises to allow boats to pass underneath. The 8 ton main lift cylinders have to be renovated every 15 years as part of routine maintenance, but on one visit it was discovered that the cylinders were leaking oil.  After removing the shafts, gaps were found in both cylinder mountings. More seriously the gaps were so large that they could not be repaired using a conventional shaft on any of the sides. One solution was to replace the entire cylinder mounting, but time and cost meant this was not a realistic option. The alternative was to replace the shaft with the Expander system. Not only did this provide a more cost-effective solution, it also assured simpler maintenance in the future.

The developers of the Expander System assert that it pays off at the first repair. The cost for the impending repairs and the subsequent normal maintenance costs associated with traditional fastening methods are completely eliminated. It’s suitable for both small and large mechanical pivots. It is also easy to remove and reinstall, simplifying subsequent maintenance. There’s an ever-increasing worldwide acceptance of the solution, with many OEMs now installing it as standard on their equipment. Expander has been used extensively within the recycling, quarrying, construction and forestry industries, but MST sees possibilities for the system in almost any industry where pivot points are found.