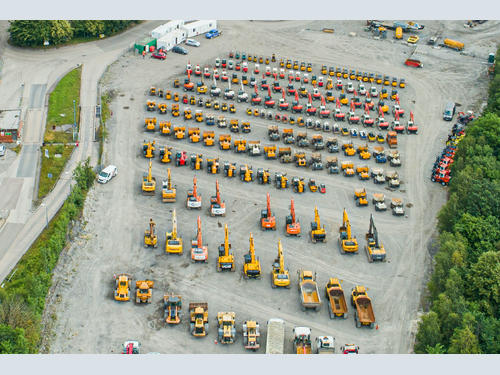 Temporarily no 'singing' auctioneers but sales continue at Ritchie Bros...

Literally speaking, it has been relatively quiet around Ritchie Bros. auction sites recently. The world's largest heavy equipment auctioneer is known for its energetic equipment auctions held all over the world with "singing" auctioneers, rolling machinery, and big bidding crowds. But the theaters have been empty and will remain empty for now. Has the industry stopped buying and selling machinery? On the contrary. Due to the coronavirus pandemic, Ritchie Bros. temporary holds all its auctions via internet and is currently seeing unprecedented online participation. Businesses continue to buy equipment at the auctions in great numbers.

In 2019 Ritchie Bros. sold USD 5.1 billion (approximately EUR 4.6 billion) worth of machinery, tractors and trucks. Over the last two decades, the company invested heavily in technology and saw a steady increase in internet participation at its auctions. Alongside bidding in person at the site, new online bidding features and products were developed, such as the Ritchie Bros. mobile app. Nowadays 78% of the winning bids are placed via the website or app.

In March, three of the Company's European auctions were held as online Timed Auctions - an easy to use bidding system, with multiple days of bidding and auction items that close on a set day and time. These Timed Auctions were held in France, the UK, and Germany, and featured 5300+ auction lots; sold on behalf of 460 equipment owners. Ritchie Bros. registered 6200 bidders, more than half of them from abroad.

"March auctions have shown massive online participation from all over the world and achieved strong selling prices," said Jeroen Rijk, Managing Director at Ritchie Bros. "Although it's strange and uncertain times for our industry, there's still a lot of projects around the world being carried out. Businesses are looking for places where they can safely buy equipment that is quickly available to them.

Ritchie Bros.' auctions in Meppen, Germany began in 2004 and are widely known for their massive line ups of tractors and other agricultural machinery. The Meppen auction in March, this time entirely held online, smashed a record with 2920 bidders - a 40% increase compared to the same auction in 2019.

"We saw exceptional levels of participation at our Meppen auction. The auctions reflect what is happening in the market. The high comsumer demand for farming products during lockdown may mean many farmers are bolstering equipment fleets to keep operations running.”

A valuable feature these times when businesses are looking to turn machinery into cash. Dutch earthmoving & contracting company Kloosterman BV has been working with Ritchie Bros. for several years and sold at a recent online-only auction.

"We usually have a pretty good idea what the selling price will be at a regular Ritchie Bros. onsite auction," said Jan Kees Kloosterman. "Initially I was a bit hesitant now with the coronavirus, but we saw a strong international participation with the online-only auction, and it helped us get good results. We immediately added more equipment items to another auction in April."

More people than ever before are buying and selling online, and it seems the industry has caught on. Ritchie Bros. website visits and web account creations increased by 15% and 19% respectively. Its mobile app users have risen perhaps even more drastically, up 90% year over year.

There are dozens of auctions on Ritchie Bros.' calendar, including in The Netherlands, France, Germany and Italy. In addition, the company also sees a growing interest in its subsidiary online equipment marketplace, called Marketplace-E. Items listed here can only be purchased online and sellers can set a reserve price on their items.

"Combining our proven technology with an unrivalled ability to match buyers and sellers of heavy equipment, we will continue to offer safe and easy ways to buy and sell through these difficult times,” Rijk concludes.

PLEASE NOTE – The next online auction in the UK with see bidding open on 12th June 2020, closing on the 18th and 19th June 2020, depending on the individual lots.