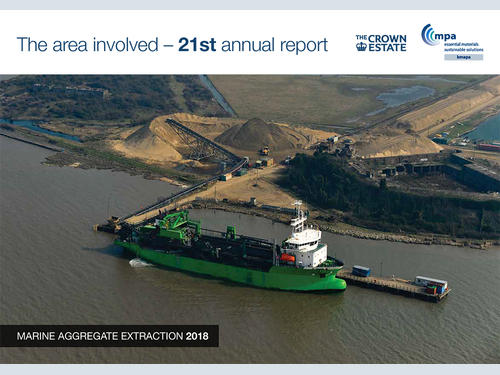 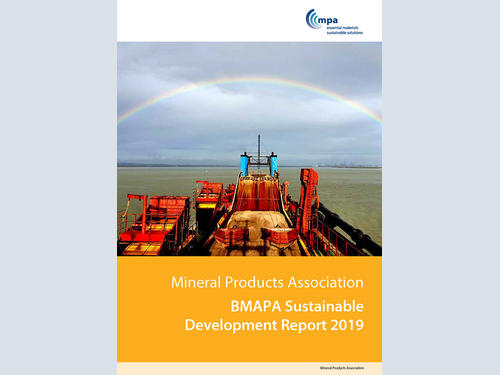 The British Marine Aggregate Producers Association (BMAPA) has recently published two new reports – one addressing the sustainable development performance of the sector during 2018, and the other, produced in partnership with The Crown Estate, reporting on the annual area of seabed licensed and dredged.

The annual BMAPA Sustainable Development report builds upon the wider sustainable development initiative established by BMAPA's parent organisation, the Mineral Products Association (MPA). The information reported is structured to align with the existing Key Performance Indicators defined in the original BMAPA Strategy document produced in 2006 with the seven MPA strategic priorities.
The report, which presents marine aggregate market and performance data from 2018, details the contribution of marine sand and gravel resources to the overall demand for construction aggregate across England and Wales. The slight increases in landings reported for marine supplies alongside the majority of other sources of construction aggregate, coincide with low levels of growth reported across the economy as a whole.

Some key points include:
Health and Safety – The marine industry remained LTI free for the duration of 2018, with continued commitment to the wider MPA ‘Safer by Sharing’, ‘Safer by Competence’ and ‘Safer by Leadership’ initiatives.

Resource Use – Total marine aggregate production increased by 3.2% during 2018 (19.0 million tonnes). While reported landings to South East England remained broadly stable, the reduction of overall landings to England and Wales reflected the softening construction market conditions elsewhere. Over the same period, exports of construction aggregate to the near Continent continued to recover in 2018, resulting in a five-year high (4.1 million tonnes).

Climate Change and Energy – Both marine aggregate production and total marine gas oil consumption/CO2 emissions reported by BMAPA members reduced slightly during 2018. This overall outcome was a slight increase in the metrics for fuel and emissions per tonne landed (+2.8%).

The latest ‘Area Involved’ report, details changes in the extent of the seabed area licensed and dredged for marine aggregates during 2018. This represents the 21st in an annual series that has been produced following a public statement of intent made by BMAPA and The Crown Estate in March 1999 which committed both parties to reviewing all dredging licences on a rolling five-year basis, surrendering areas no longer containing economic resources of marine sand and gravel, and publishing an annual report detailing the extent of dredging activities within licensed areas.

Mark Russell, Executive BMAPA Director, said: "Mineral products represent the largest material flow in the UK economy, with the vast majority of supply used in UK construction improving our housing, schools and hospitals alongside the transport, energy and water infrastructure on which society at large is so reliant. Construction, including high-profile infrastructure projects such as HS2, represents a key element of Government's Industrial Strategy aiming to boost productivity and secure sustainable future economic growth particularly in the Regions.

"Marine aggregates make an important contribution to this supply, as well as supporting essential coast protection projects and contributing to the balance of payments through our exports to Continental neighbours. These two reports very much reflect the marine aggregate sectors commitment to long-term sustainable practices, building on two initiatives that were established in 1996 and 2006. Throughout the challenging economic conditions that have emerged over this period, the marine aggregate sector has maintained its commitment to transparently report its performance across a range of indicators.

"Our sustainable development report demonstrates the ongoing, real-world impact of the current economic climate on an important industry sector that provides essential construction materials to support future growth, while at the same time highlighting the industry’s continuing steps and progress to improve and enhance its sustainable development credentials.

"Meanwhile, the area of seabed licensed and dredged remain key indicators of the UK marine aggregate sector's performance and its potential to interact with both the environment and other marine users. Over the last 21 years, the overall reductions in both reflect an industry sector that is committed to continual improvement."