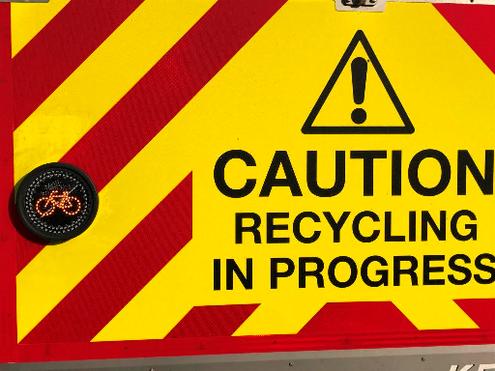 Vehicle safety specialists Sentinel Systems have added a new warning sign to their award-winning system, the Bike Hotspot, to help to further reduce the number of accidents involving cyclists and commercial vehicles.

Sentinel designed the Bike Hotspot system with the safety of cyclists at the forefront of their minds. Every year a high number of cyclists are killed or injured on urban roads, many of these incidents involving large vehicles. As an addition to the Hotspot system, Sentinel has introduced an LED cyclist warning sign.

The Bike Hotspot system works by fitting sensors on the nearside of the vehicle and the sign will activate at speeds lower than 10mph. The sensors are linked to a choice of alarm, including in cab sounds, LED lights and external speakers that warn cyclists to move away from the vehicle. Installing the sign onto vehicles will give cyclists a visual indication that the vehicle is about to manoeuvre, giving them time to stay out of the way of any potential harm.

With 19,000 cyclists being killed or injured in road accidents every year in the UK, The Bike Hotspot system not only saves lives, but also prevents side damage to vehicles, reducing potential insurance claims and vehicle downtime. 20% of fatalities occur in collisions with HGVs, particularly when vehicles are turning left, but the Bike Hotspot system in conjunction with the LED Cycle Sign detects and warns cyclists before an accident can happen.

All installations of Sentinel Systems’ products are carried out by Sentinel employed and qualified engineers who have experience in vehicle mechanics and knowledge of electronic systems. The company’s engineers are also available 24/7 for any service or maintenance calls to give customers peace of mind.