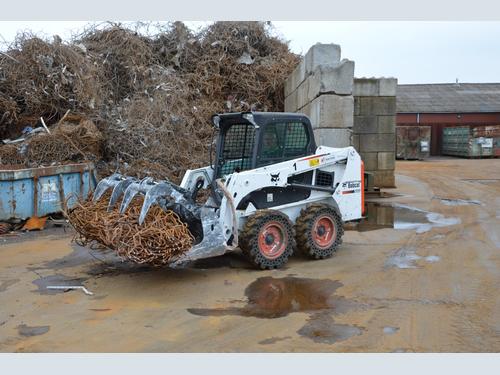 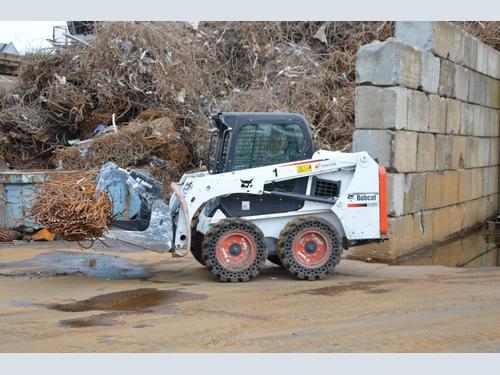 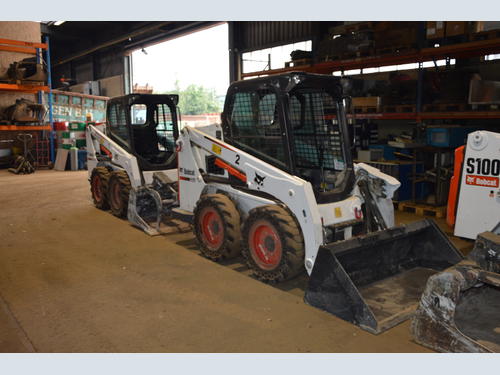 Metal processing company, Van Groningen, based in Nieuw-Vennep in the Netherlands, has purchased six new Bobcat machines. Van Groningen’s principal business is as a subcontractor on demolition projects, responsible for removing metal from buildings, which is then traded. Van Groningen has an extensive fleet of its own equipment, including excavators and truck-trailer combinations. Of the six new Bobcat machines, five are skid-steer loaders mainly used on demolition projects to remove debris from buildings. The sixth is a Bobcat mini-excavator, which is a true jack-of-all-trades for all kinds of tasks and can also be equipped with a demolition hammer.

Van Groningen started out in business over fifty years ago as an iron and metal trade company, but eventually decided that it wanted to do more than just wait for metal to be offered on the market. Instead the company decided 18 years ago to enter the demolition market, to ensure there was a constant flow of metal to trade. Every year, Van Groningen now extracts around 80,000 tonne of iron and other metals from demolition projects. The company employs 60 permanent staff members at four locations. Van Groningen works mainly in the Netherlands, but also sometimes internationally such as a project in Finland, where a power plant is being demolished. The metals are comminuted, sorted by type and quality and then resold to, for example, exporters and steel mills.

Extensive Own fleet
Van Groningen has its own extensive fleet. The company owns 21 excavators, some of which are based in the company’s yards. The majority, however, are deployed on demolition projects and are specially adjusted for this work. For example, there are excavators with 30 m booms to demolish high-rise buildings. Tools are also used, such as sprinklers to reduce dust, scrap metal shears and concrete pulverisers. The excavators are transported to the projects using the company’s own fleet of twelve truck/low-loader combinations.

Van Groningen has been using Bobcat machines for indoor demolition since 1992. Though Van Groningen sometimes employs them with attachments, they are mainly used for the removal of debris from buildings. For this, they are normally equipped with a bucket or an industrial grapple.

Vandal-proof and Safe
“We use Bobcat equipment because of the good price-quality ratio and because they are extremely reliable,” says Mark de Boer, Commercial Director at Van Groningen. “We haven't had any technical problems in all these years. We regularly carry out servicing with original Bobcat parts, because we do not want to take any risks and do not want to infringe on warranties if problems should arise.”

“Bobcat machines are one hundred percent vandal-proof, so everyone can work with them and the machines are not damaged when working in harsh conditions. Operators are safe thanks to the cab's ROPS and FOPS certification. The big advantage for demolition projects is that the machines are small and very manoeuvrable, so you can work well in small spaces.”

6000 Operating Hours
Van Groningen has been working with Bobcat products since 1992. “For us, Bobcat is really top-of-the-line. That explains our brand loyalty,” says Mark De Boer. “We started with the T753 model, which was exchanged for the T160 around 2002. We do keep them for a very long time, but unlike the excavators, the Bobcat machines are not used 100% of the time. We don't use them on all projects. We normally look to replace them after 6000 hours, but they can easily last longer.”

“When we decided to purchase the five new Bobcat skid-steer loaders, the much older T160s were still 100% reliable, even after more than fifteen years in demolition. The new Bobcat machines have a fresh and clean look and are therefore much more representative and it is great to be operating with neat machines again. It also surprised us that the older Bobcat machines are still so valuable after all these years and we were able to trade them in as well.”

Weighted Versions
Van Groningen has purchased three Bobcat S450 and two Bobcat S100 skid-steer loaders. “These are standard versions,” Mark De Boer explains, “which are slightly heavier at the rear, so that they can carry more weight. To make them a bit more comfortable for the driver, they are fitted with solid tyres. To give you an impression of the manoeuvrability: the S100 is only 1.17 m wide and 1.88 m high and can rotate fully about its own axis.”

In addition to the five skid-steer loaders, Van Groningen has purchased a Bobcat E35z mini- excavator, which replaces another brand of machine. The E35z weighs 3.5 tonne and is only 1.75 m wide and is a Zero Tail Swing model that can work in tight spaces. The view from the cab is very good and attachments such as a demolition hammer or a sorting grapple can be easily operated with the joystick. Mark De Boer adds, “if the mini-excavator functions just as smoothly as the Bobcat skid-steer loaders, we will not move away from it in the future, because we strive to have as many machines from the same brand as possible.”