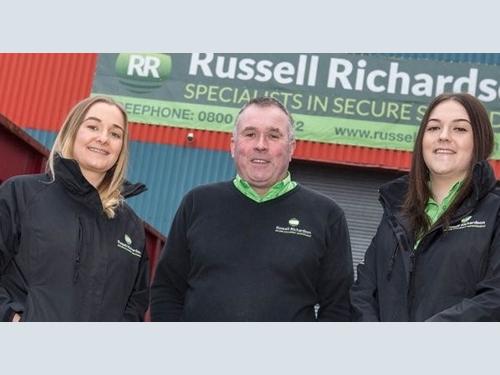 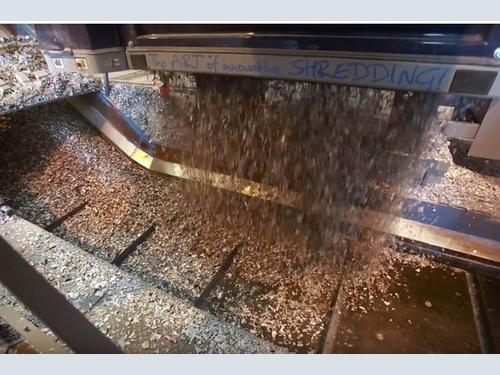 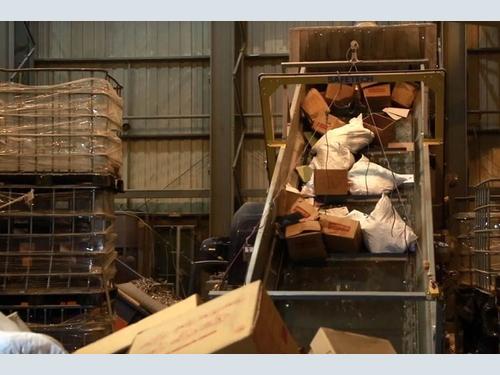 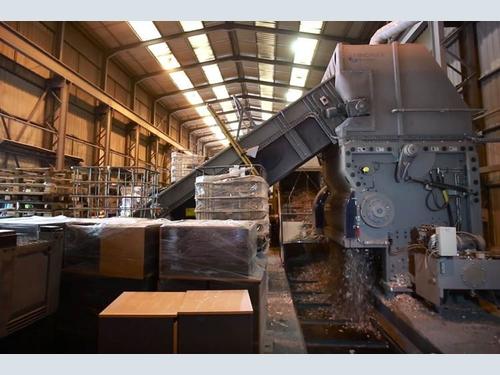 To destroy confidential documents, Russell Richardson, a leading UK company in the field of secure document management, operates a Lindner Micromat 2000 single-shaft shredder, which complies with the requirements of DIN 66399-2 to security stage 5 for document shredding. Because the new shredder has higher efficiency than all the company‘s previously used smaller shredders combined, Russell Richardson can not only meet the companys present requirements without previously needed special shifts, but also has the necessary capacity reserves to meet the customer requirements of tomorrow.

One of the characteristically green trucks from Russell Richardson & Sons draws up at the company’s headquarters in the city of Sheffield to unload its freight: the freight normally consists almost entirely of confidential documents containing personal, medical or financial data. It may either be loose, bundled or in files. This specialist firm for secure document shredding will have been tasked with the job of destroying them. If the customer so wishes, the company can pick up the documents anywhere in the country, while other firms prefer to deliver them with their own vehicles.

In both cases, the staff at Russell Richardson place the sacks or cardboard boxes containing the documents directly onto a conveyor belt after unloading. These are then transported into a Micromat 2000 from Lindner Recyclingtech. Depending on the screen size being used, the Micromat processes the material into snippets that comply with the specifications for the destruction of confidential and secret data (security level 3 – 5, DIN 66399-2). After compressing the material into bales, it is loaded back onto trucks that transport it to a recycling company. There, this material, which is predominantly treated in the UK as Sorted Office Waste (SOW), is then typically processed into hygienic paper such as kitchen rolls, toilet paper, paper tissues etc

High throughput was the key argument
Managing Director Jonathan Richardson reports: „The shredding of confidential documents stretched our previous machines to well over their capacity limit. In the end, we were not able to cope with the ever increasing demand with night and weekend shifts. In the search for an alternative, Mach Tech Services Ltd., Lindner‘s UK partner, offered us a future-oriented solution in the shape of the Micromat 2000.

After some consultation, we decided to go for it. We were promised a very high throughput of 5 to 8 t/h for our input material and this was basically the key argument in our decision to purchase.“

Russell Richardson put the Micromat 2000 on stream in November 2015 and has since been shredding input material that normally has a density of around 200 kg/m³, a moisture content of less than 15 % and a size of up to 1 m². Richardson rates the experience they have collected until now very positively: „We have seen in practice that we were right to trust the promise on throughput. In fact, we have achieved on average a shredder performance of 6 t/h, which is considerably above the combined capacity of all the systems we previously used. As a result, we are ideally equipped to keep pace with the volume growth we anticipate.“

Expectations on reliability and ease of maintenance fully met
The system operates in 8-hour shifts to give a total of around 2,000 hours a year, equivalent to an annual throughput of some 12,000 tons. Thanks to this high throughput, special shifts at the company are now a thing of the past. Richardson is also very pleased with the general availability: „Each of the 104 knives has four usable blades, and each blade lasts for around 200 hours, which is more or less a month. After this period, they are simply unlocked, turned and tightened again. The knives thus only need to be replaced every four months, and because they are so readily accessible thanks to the particularly large maintenance flap on the Micromat, unscrewing and replacing the knives only requires the machine to be down for a very short time. Apart from that, we can also carry out minor maintenance work ourselves without problem.“

Summing up, Richardson said that the company saves a considerable amount of energy and money compared with the previous situation with several small shredders. It also benefits from a considerably higher throughput. In reply to a question about further expansion plans, Richardson says: „This is not a problem we need to think about at present due to the high capacity of the Micromat 2000. But if and when we do need to expand, I will most definitely buy another shredder from Lindner without any hesitation whatsoever.“ And he also mentions another key aspect: „We are particularly pleased that, with this new machine, we have contributed to a good work atmosphere with happy employees, because they can now enjoy their free weekends again.“

Geared to efficient productivity
The Micromat is a powerful single-shaft shredder, which Lindner has rigorously designed for low energy consumption plus high productivity. Thanks to Lindner‘s modular system, it can be flexibly configured for its particular purpose. The Micromat 2000 installed at Russell Richardson is equipped with a powerful 132 kW motor that allows an efficient rotor speed of 265 rpm and thus ensures a high throughput. The respective belt drive and, connected with this, the maintenance-free safety clutch, reliably prevent foreign matter that may be contained in the delivered material from causing damage to the drive unit. In addition, the system is equipped with a dust collector to comply with the stringent health and safety requirements, while a combination of spark detector and fire extinguishing system helps to prevent fires.