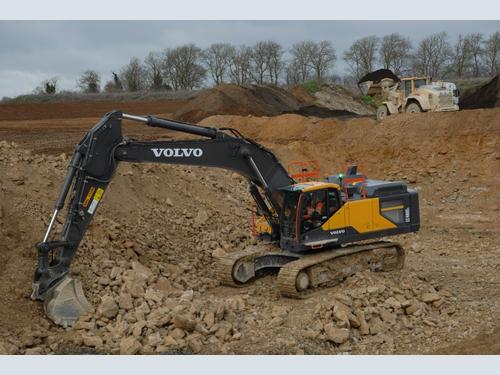 Brauncewell Quarries Ltd, an independent family run aggregates business has opted for another Volvo 50 tonne excavator to take over as the new prime mover at its facility located close to Sleaford in Lincolnshire.

The Company has a long association with operating Volvo construction equipment products at the Brauncewell quarry which includes both wheeled loaders as well as excavators. “Our first Volvo machine was a Volvo L90 that we purchased back in 1990,” recalls Managing Director John Dickinson. “It was that good in terms of reliability and performance we only replaced it a couple of years ago with 20000 hours on the clock and just one major overall. We’ve pretty much had Volvo machines ever since then and in general we’ve been pleased with them. We did have some issues with one particular model, but the team at Volvo stood by it and worked through the issues, so as far as after-market support is concerned we just cannot fault them at all,” continues John.

And joining the current line up of three Volvo L150H wheeled loaders, that were supplied fairly recently for main re-handling duties along with an L60F and an L220D, comes the company’s new prime mover in the guise of a Volvo EC480EL. The machine has been specified on standard reach equipment featuring a 7.0m boom and a 3.35m dipper arm giving the machine the optimum digging performance and reach to load material ‘as dug’ from the face into the mobile crusher.

Thus rigged, the 50 tonne excavator has a maximum reach of 12.1 metres and a generous dig depth of 7.8 metres. “Up until ten years ago we would regularly blast the quarry face and then re-handle the material with smaller machines. Opting for this size of machine using half of its time on hammer and the other half loading material into the crusher, we’ve significantly reduced the amount of cost associated with drilling and blasting as well as reducing the amount of unwanted fines. The new EC480E is the third machine of this size that we’ve operated in this way and it fits in well with our production requirements,” continues John.

The Stage IV Final 13 litre engine, featured in EC480E develops 378 nett hp and is ideally matched to its automatic sensing mode hydraulic system. The machine’s hydraulic system is perfectly matched to the engine and is controlled by an advanced system which provides on-demand flow and reduces power losses within the circuit. Volvo’s unique ECO mode contributes up to 9% of the machine’s total improved efficiency over the previous D model– without any loss of performance in most operating conditions.

As well as improving fuel efficiency, this increases controllability for more precise performance. Otherwise, Volvo’s integrated work mode system offers the operator a choice of five work modes according to the task in hand – I (Idle), F (Fine), G (General), H (Heavy) or P (Power max) – for optimum efficiency and machine performance. When the controls have been inactive for a pre-set amount of time, the excavator can be programmed to automatically reduce engine speed or even shut down to further reduce fuel consumption and noise. Operators can keep track of both current and average fuel consumption via a simple gauge in the cab.

Other features on the 50 tonne excavator include a hammer-shear circuit and quick fit hydraulics which come as standard and Brauncwell Quarries has added the option of an Enigma tracker system. Volvo’s Care Track telematics system, which again is standard, will monitor the overall performance, fuel consumption and the way the machine is being operated remotely. And as with all the other Volvo machines at Brauncewell Quarries, the new EC480E has been covered by Volvo’s Blue service support agreement meaning that the machine will be regularly maintained by Volvo service technicians using genuine Volvo parts giving John Dickinson total peace of mind over the effective working life of the machine.