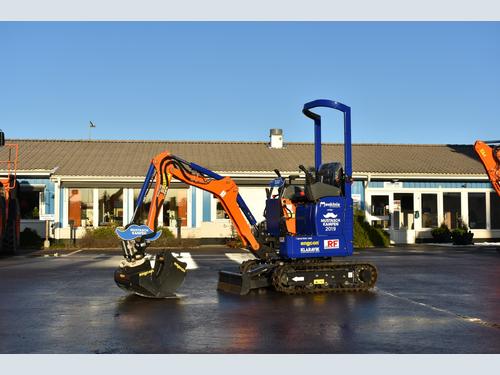 Taking place throughout most of November, bidding is underway in an on-line charity auction of a new Doosan DX10z 1 tonne mini-excavator organised by Maskinia, the Authorised Doosan Construction Equipment Dealer in Sweden, to raise funds to fight prostate cancer.

In collaboration with suppliers, RF System and Engcon, and in partnership with the auction site, Klaravik, all of the money from the auction will be donated to Sweden’s anti-prostate cancer campaign, Mustaschkampen, which is held in November every year to raise funds for the fight against prostate cancer, Sweden's most common cancer disease. With a starting price set at SEK 170,000 (16,025 Euros), the auction started on 1st November on www.klaravik.se website and continues until Friday 29th November, when the winning bid will be decided.

Doosan DX10z Blue Edition
The DX10z has been painted in the same blue colour used by the Mustaschkampen campaign and carries the Mustaschkampen ‘moustache’ logo and the logos of the participating companies, RF System, Engcon and Klaravik. Newly designated by Maskinia as the Doosan DX10z Blue Edition, the machine is equipped with a new tiltrotator from RF System and new buckets from Engcon.

“We are incredibly pleased that Maskinia, together with its great partners, has once again worked very hard to prepare for and support our fight against prostate cancer. Any funds raised will enable us to contribute even more to research to improve cancer care and, in the long term, hopefully solve the mystery of the causes of prostate cancer.

Prospective bidders had the opportunity to view the Doosan DX10z Blue Edition during last week’s Maskiniadays 2019 event in Linköping, which ran from 15-16 November. The machine had a central location at this open house event and attracted great attention from visitors.

Raising Funds to Fight Cancer
Last year, during the Svenska Maskinmässan 2018 Fair in Sweden, Maskinia auctioned off a unique black edition Doosan DX140W-5 wheeled excavator, which the company itself won in an auction held on the Doosan stand during the Intermat Exhibition in Paris in April 2018.

The second auction at the Maskinmässan Fair brought in the fantastic amount of SEK 762,000 (71,850 Euros) which was divided into three equal parts between the three organizations, the Breast Cancer Association, the Prostate Cancer Association and the Child Cancer Foundation.