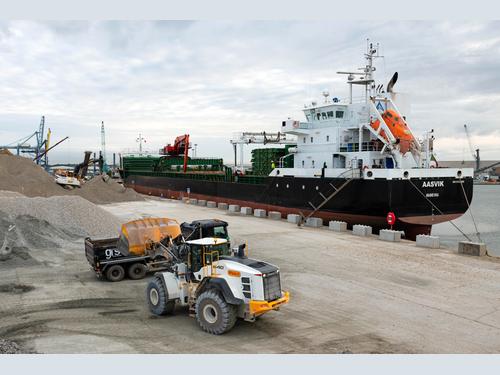 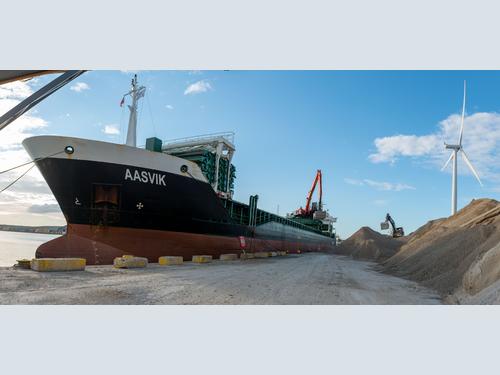 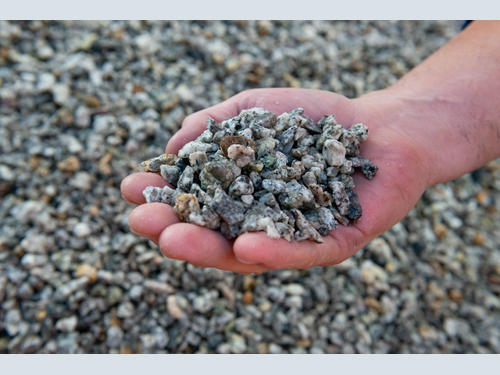 The delivery marks the start of an exclusive deal which enables GRS to import more than half a million tonnes of secondary granite – branded Enviroc® – from Cornwall into London each year by ship, with a fraction of the embodied carbon of other construction aggregates.

London developers looking to build greener can specify the GRS material, available in bulk or bags, for almost every construction application from sub-base and capping layers to structural concrete and asphalt, and even decorative landscaping.

Recognised by leading green building rating systems as one of the most sustainable alternatives to newly-quarried aggregates, Cornish granite has previously been used in a handful of London developments, including the Olympic Park. But its widespread use has been constrained by the belief that transporting it into London isn’t viable.

Yet in partnership with the Port of Tilbury, GRS has invested £4 million in a new Molson CDE aggregates processing plant on the dockside to produce a range of high-quality, certified single-sized products to meet the needs of construction across London. Because of the plant’s location, that material can be delivered across the capital by road, rail and even river using GRS’s wholly-owned Thames freight business Walsh Marine.

Power for the aggregates plant is supported by an on-side wind-turbine and the stone washing system uses rainwater that is recycled and reused time after time. Silt washed off the stone is collected for use in land remediation schemes further down the Thames and GRS says these ‘fines’ may themselves be used to produce a lightweight aggregate in the future.

For centuries, the production of china clay (kaolin) has shaped the Cornish countryside. For every tonne of china clay extracted, around 9 tonnes of granite by-product is generated – this has built up into enormous waste piles estimated to be around 500 million tonnes which are now the source for Enviroc aggregates. The new venture sees GRS’s Cornish subsidiary Maen Karne haul the raw material from a china clay pit near St Austell to nearby Fowey harbour where it is loaded onto ships to make the 400 nautical mile trip to Tilbury for processing.

Antony Beamish, Managing Director for GRS Trading, said: “This major investment allows us to turn an industrial by-product into a high-quality construction aggregate, Enviroc. By also transporting this material by water we can achieve unparalleled environmental performance – an independent study suggests the carbon footprint is on average 47% lower than the equivalent primary aggregates. That makes Enviroc arguably the UK’s most sustainable aggregate. Using it in combination with low-carbon cement, for example, could produce the lowest carbon concrete achievable.

“We anticipate that Enviroc will change the way materials are specified on major construction jobs. Contractors can count on a consistent, quality product that meets specification and at the same time know that it’s the most sustainable aggregate there is – a UK-sourced, industrial by-product transported by water. It doesn’t get better than that.”

Aggregates make up the single biggest volume of any materials needed for virtually every construction scheme, and London consumes about 10 million tonnes each year. With recycling of demolition and excavation waste virtually at its maximum in the capital, GRS believes the way to further improve the sustainability of aggregates is to use secondaries and transport them as efficiently as possible. Last year GRS announced an exclusive deal to bring to market millions of tonnes of granite aggregate arising from British tungsten mine which has reopened in Devon.

Besides a marine wharf and processing plant at Tilbury, GRS is recommissioning a rail freight terminal to be able to transport secondary aggregates more widely across Greater London and the South East. Transporting aggregates by river and rail significantly reduces road miles and traffic congestion, and represents a fraction of the carbon emissions of road haulage. It also frees up road vehicles to focus on ‘the last mile’ to deliver products to construction sites – and GRS runs one of the most modern, clean and safe HGV tipper fleets in the capital, accredited to FORS Gold standard.

The inherent characteristics of granite mean that Enviroc is one of the most durable, versatile and consistent secondary construction aggregates available. GRS is able to make and supply the vast majority of typical aggregate products including type 1 sub-base, 6F5, single sizes, coarse sand, mortar sand, etc.

Enviroc also complies with the requirements of British Standards for use as  concreting aggregate, as unbound and hydraulically bound aggregate in civil engineering works and road construction, in applications such as drainage trenches, earthworks and capping, and in bituminous materials and surface treatments for roads, airfields and other trafficked areas.