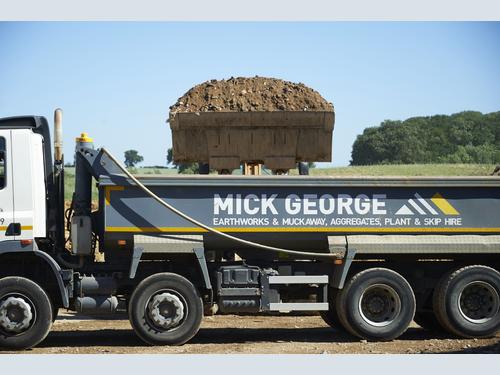 Following the successful completion by local firm Mick George Ltd of the initial stages of the Ellistown clay pit site restoration, which Ibstock Brick operates to extract clay for their brick production process, they have now been granted planning permission by Leicestershire County Council for the second restoration project in the vicinity involving the prestigious Leicester Quarry, which could create 14-full time employment opportunities.

The original consent previously granted for the extraction of clay was for a large void occupied by deep water, constituting a permanent, unnatural landscape. Following agreement with Ibstock Brick to submit a revised application, Mick George Ltd will now be restoring the site to its former levels and previous use.

The new proposal will see Mick George Ltd infill the quarry using inert soils, enabling the land to be restored close to pre-development ground levels, while contributing towards wider landscape improvement objectives and policies set-out by the County Council and The National Forest.

The intention is to start importing suitable materials at the south west of the site, progressively working northwards towards Leicester Road, reinstating land sequentially ahead of latter phases in the east and south of the site.

A series of ecological and conservation benefits are set to be gained through the project, most notably the introduction of grassland, broadleaf woodlands, wetlands and species rich hedgerows, forming valuable habitat corridors, consistent with local biodiversity plans and National Forest strategic objectives.

The announcement signifies a landmark twentieth quarry operated by the Mick George Group.

The business has extensive experience fulfilling restoration programmes in live working environments, ensuring little disruption to the local community. This has been particularly evident at the nearby Ellistown quarry, where the company has managed to considerably reduce the forecast, first phase of infill from seven years to within four years – another project in collaboration with Ibstock Brick Ltd.

Since expanding its operating region into the Leicestershire area, the beneficiaries have been felt far beyond the primary construction market. A handful of local groups have taken advantage of the dedicated community fund that the business makes available, which has to date supported in excess of 120 separate initiatives, totalling more than £4million.

Jon Stump, Joint CEO at the Mick George Group commented: ‘’We’re very pleased to have been granted planning to undertake the restoration of Leicester Quarry. It is testament to the quality works that the business has delivered beforehand.’’

Stump continued: “Perhaps of more importance, it provides the Group with our third long-term base in the Leicestershire county, allowing us to continue to build strong relationships with our customers in the area and the local community. These include some high profile and established corporations such as Leicester City Football Club and Leicester City Council among others.’’