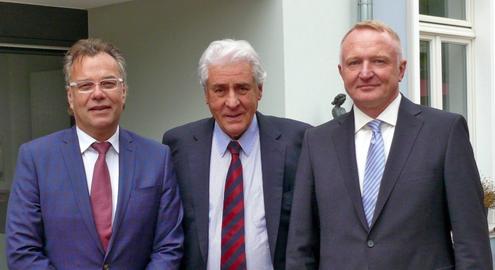 Since 1st October, AUMUND Fördertechnik GmbH in Rheinberg has had a new Managing Director, Jens Müller (54), who is responsible for finance, controlling, IT, HR, general admin, purchasing and production, alongside Robert Gruss, Managing Director for sales, service, technology and R&D, and Franz-W. Aumund, President.

Jens Müller has taken over from Andreas Klottka, who had carried out this role on an interim basis since Dr Volker Brandenburg took early retirement. Andreas Klottka had undertaken this role in addition to his responsibilities as Managing Director of AUMUND Holding B.V.

As well as his principal responsibilities as head of the finance and controlling functions, the new Managing Director places strong emphasis on successful procurement management, for which he believes the input from staff at the AUMUND Group subsidiaries in other parts of the world will be of paramount importance.

After graduating in economics, Jens Müller started his career with chartered accountants Ernst & Young in Hamburg, Germany. After seven years in auditing, Jens joined the Körber AG Holding, also in Hamburg. Over a period of 14 years under this mandate he held various positions, one of them being Chief Financial Officer of a machinery and equipment manufacturer which operated internationally. Since then Jens was Managing Director of Richter-Helm BioLogics GmbH & Co. KG, Hamburg, and of DiaExpert GmbH, before joining AUMUND Fördertechnik.