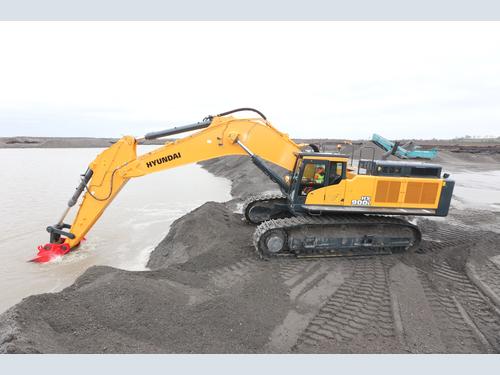 Having run Hyundai excavators since 2005, Irish plant and dredging contractors, Mill Road Plant Ltd, are familiar with the positive long-term performance and reliability they afford and accounts for the company’s long-term loyalty to the brand. This was further bolstered recently when the Co. Offaly company, run by Donal Walsh and his son Mark, took delivery of the first Hyundai HX900L excavator to enter service in Ireland, from long-serving dealer Whelan Plant Sales, based in Barefield, Ennis, Co. Clare...

Dedicated to the Hyundai brand
Joining a large-scale fleet dominated by Hyundai machines, which work collectively on gravel recovery, production, loading and pit development, the new HX900L is tasked with the responsible role of recovering gravel from lagoons at this intensive operation located at Derryarkin close to Rochfordbridge, Co. Westmeath.

Reliability and consistency are key
The 90-tonne machine is at the core of gravel production – therefore reliability and consistency of output are obvious prerequisites to the application - which accounts for the level of investment made in the new unit. Since the machine is destined to serve this working role over the longer term, the demands of the application have inspired its specification and accounts for the unique combination of reach and bucket capacity it presents.

Taking over the role from another machine in the same size class, Donal Walsh’s experience of Hyundai suggested the HX900L was a very desirable successor as he outlined; “I travelled to see a HX900L working in the U.K. and even though it was in a much different application to ours, I immediately knew it was the right machine for the job. I agreed the specification with George Whelan, and he put an attractive deal together without delay.”

This prior research culminated in the recent delivery of the new HX900L which has recently been commissioned on site representing the beginning of a new era for gravel recovery at Derryarkin.

The new HX900L has not failed to deliver
While a high level of anticipation prevailed over the running of the machine in this demanding application, it certainly has not failed to deliver based on Donal’s initial experiences as owner operator; Donal said, “The digging power with the HX900L is excellent and it’s a really smooth machine to operate. To get the most out of a machine like this with the kind of reach it offers, stability is very important, and I see it as being first class since it’s so well balanced over the whole working range.”

Achieving this balance of digging power, stability, reach and bucket capacity may seem beyond the realms of possibility without making compromises in some respect but has been achieved by close cooperation between Donal Walsh and Whelan Plant Sales coupled with the range of options presented by Hyundai to best tailor the machine to a specialist application such as this.

From every point of view, the HX900L shows pure strength and quality
Incorporating the longest possible boom specification, without moving up to a specialist long reach boom configuration, the machine has been delivered with an 8.2 metre mono boom and 4.4 metre dipper arm. When allied to a directly mounted bespoke bucket produced by Tighe Engineering, with cooperation from Donal Walsh and Whelan Plant Sales, the machine offers a maximum digging depth of 9.6 metres while yielding maximum reach at ground level of 14.43 metres. With the bucket boasting a capacity of close to six cubic metres through the greater capacity afforded by its wing shields, achieving favourable stability has been aided by the fitment of the optional heavier counterweight which weighs in at 16.5 tonnes while the long undercarriage running on 700 mm wide double grouser track shoes affords an operating width of 4.2 metres.

This level of working capacity places particular importance on the build quality of the machine which has been singled out for particular merit by Donal as he emphasised; “The build quality looks very impressive on the new HX900L and from every point of view it just shows pure strength and quality.”

The machine offers impressive power in relation to its size
In addition to this level of reassuringly strong structural formation, the machine also offers impressive power in relation to its size and outclasses many competitors’ machines in the same weight classification. Despite the impressively high power rating of 478 kW provided by the Scania V8 engine at the heart of the machine, initial findings on fuel economy are positive as Donal continues; “For a machine in this size class, the fuel consumption is already quite low and without even been run in just yet is using four hundred litres per day.”

Much of this economy is attained by the sheer power of the machine, which assists in deriving maximum return from the hydraulics while running at low engine revs. Consequently, the unit is very much at ease with the application despite recovering high volumes of material over the course of each working shift.

First-rate comfort and smooth controls
Conducted in high-class operating comfort, with smooth and responsive controls, and an intuitive and user-friendly control system, the machine presents many positives in this crucial area as Donal insists; “Based on the speed of its boom and slewing movements, it’s hard to believe it’s a ninety-tonne excavator. This was already noticeable on the HX480L, but I am surprised at how fast the HX900L actually is, since machines of this size are usually more about capacity than speed, but this has both with first-rate comfort and smooth controls.”

Obviously settling into its working role particularly well, the new HX900L is just the latest manifestation of faith in the Hyundai brand, with a series of other machines already present on the fleet and working on other roles within the same operation. From the oldest Robex 500LC-7A long reach excavator, through to the HL980 wheeled loader and right up to recent excavator additions, in the form of a HX480L and HX235LCR, Mill Road Plant are clearly true Hyundai ambassadors with this position reached through satisfaction with both the equipment and local aftersales support since the initial unit joined the operation in 2005.