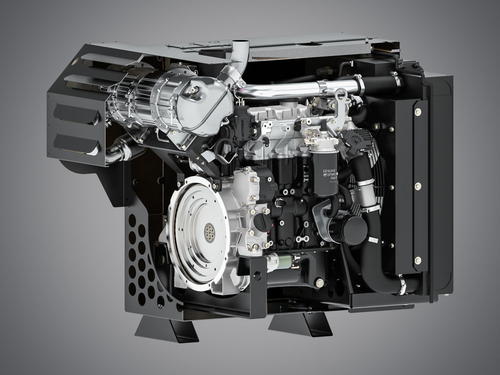 Hatz, the leading German manufacturer of diesel engines has brought out two new versions of their popular Silent Pack engine. The engines were formally presented at the Eima trade exhibition held in Bologna, Italy, where both the three and four cylinder sets were on display

The new Silent Pack for the H-series engines is designed to reduce noise emissions, whilst providing optimum protection and minimum installation space.

The ‘plug-and-play’ solution combines sound insulation of over 60 percent with security against unwanted contact, rain, dirt or vandalism. They are available as an open power unit (OPU) and can be ordered complete and ready-to-install. In addition, the new Silent Pack engines can also be used to retrofit existing machines.

The new Silent Pack engines have a unique modular structure making them suitable for the Hatz H-series engines; 3H50TI, 3H50TIC, 3H50TICD, 4H50TI, 4H50TIC, 4H50TICD. Virtually all parts are identical for all H-series engine variations. A cover for the diesel particulate filter (DPF) is available for the EU Stage V-compliant Hatz TICD models. The maintenance hoods are adapted to the dimensions of the three- and four-cylinder engines.

The new Hatz Silent Pack has been redesigned from the ground up and offers significant benefits to both machine manufacturers and operating companies: The low weight of less than 100 kilograms supports manufacturers who need to keep their machines as light as possible. The three-cylinder TI and TIC model versions, the encapsulation weighs only 91 kilograms, the largest version – the Hatz 4H50TICD – the encapsulation weighs 98 kilograms.

In addition, Hatz has designed these engines to be easily and simply maintained. The maintenance opening can be quickly removed, providing immediate access to the operating and top sides. This makes all the regular maintenance points such as the oil filter, oil dipstick, oil filler neck or main fuel filter easily accessible.

The engines will be available in the UK from their UK branch, Hatz GB.

Hatz diesel engines have been around since 1910. From their manufacturing base situated at Ruhstorf, Germany, Hatz produce a range of modern diesel engines from 3 to 55 kW. Their UK subsidiary, Hatz GB Limited, has its facilities centrally located in Hinckley, Leicestershire