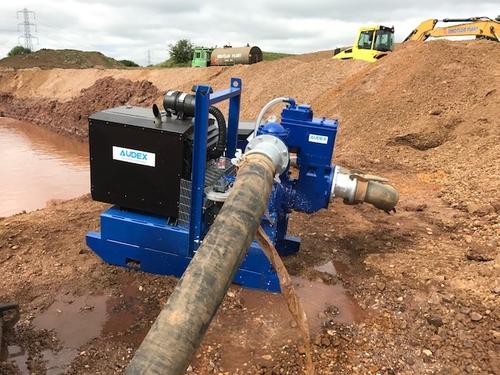 Atlantic Pumps, the Sheffield based supplier of industrial dewatering and pumps for handling abrasive applications, were approached by a Derbyshire Quarry, who had been experiencing problems with their hired-in dewatering pumps. These pumps were continually failing which meant they were incurring costly and disruptive downtime. Disappointingly, repairs to the pumps were becoming a regular occurrence.

Shardlow Quarry is owned by Hanson Aggregates. The quarry first opened in 1989 and is one of the largest sand and gravel operations in the Trent valley. They discussed their on-going pumping problem with Atlantic Pumps Sales Manager, Nathan Rowles during an arranged site visit.
The outcome of this meeting, was that Atlantic Pumps rapidly delivered, from stock, five diesel dewatering pumps to the site: one Audex AD100, two AD150’s and two Audex AD200’s.

These UK-built diesel pump sets feature a Hatz 4H50TIC engine and are fitted with the Audex Priming System. This priming system requires no regular maintenance and has proved capable of keeping the pumps operational far longer than the pumps they have replaced.

The original pumps supplied had traditional sliding vane priming systems which require daily maintenance. This can be time consuming and, if not properly maintained, they will fail, leaving the operator frustrated alongside expensive downtime and the costs of a replacement.

The Hatz 4H50TIC engine is an extremely compact, turbocharged 2-litre engine that reaches a maximum power output of 55 kW with a weight of just 173 kg, setting the benchmark in performance. The engine fully complies with the stringent exhaust emission limits in the EU and the USA, even without the use of a diesel particulate filter (DPF).

As the Audex AD pumps use a third less fuel, when compared to the pumps previously on site, Shardlow reported lower energy emissions and significantly reduced costs. In addition, the AD pumps were found to be considerably lighter and easier to move around the site with the durable trolley design offering greater flexibility, whilst continuing to protect the unit against onsite wear and tear.

Consequently, Shardlow have seen a big improvement in pump reliability and only a small number of service visits have been required. These were scheduled to ensure that the pumps were maintaining their high level of service. Finally, the overall effect of Atlantic Pumps intervention has been reduced downtime and reduction in operating costs.

Atlantic Pumps are a global manufacturer and distributor of pumps designed for abrasive applications focusing on the mining, quarrying and mineral processing industries.

Hatz diesel engines have been around since 1910. From their manufacturing base situated at Ruhstorf, Germany, Hatz produce a range of modern diesel engines from 3 to 55 kW. Their UK subsidiary, Hatz GB Limited, has its facilities centrally located in Hinckley, Leicestershire,