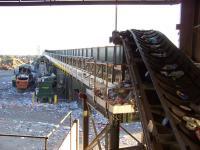 Awarded the initial contract for supply of conveyor systems for the Grosvenor Waste Management Century Wharf site, Canning was subsequently awarded a second contract for the supply of two quality assurance stations and eight associated conveyors for their new MRF production line on the Crayford site.

Two new 12m long troughed belt conveyors installed by Grosvenor Waste Management are 900mm wide and are designed to accept mixed plastics from an existing conveyor and elevate to feed onto the second new conveyor located at high level which has been supplied by Canning.

This second feed conveyor is approximately 90m in length and accepts mixed plastics at high level and runs at a height of 6 metres horizontally over the yard. Running parallel to the existing building it discharges via a 2-way chute directly into the new plastic and tin sorting plant feed hoppers.

Paper line conveyor system.
Canning has also been tasked with the supply of a new paper line conveyor system to the Century Wharf site which has been built and is now awaiting dispatch to the site. This third element of the on-going project will involve the supply of seven conveyors including Canning SuperDrive motorized drums and includes modifications to existing picking conveyors.

Canning will modify three existing conveyors so that all are the same length. With their duty being to feed onto a new conveyor or into an existing bay this modification will involve the installation of a 2-way chute with electric actuator flap doors.

Receiving feed from the three existing conveyors a short 15m long x 1.2m wide collecting conveyor will be installed which is designed to accept all reject materials from the three belts. This conveyor will run horizontally beneath the picking station floor and out through the back of the building before discharging onto an elevated conveyor. Canning will supply a 20m long troughed belt conveyor which is designed to elevate up at approximately 20°, running parallel to the building before discharging onto a new overhead conveyor.

75 metres in length this conveyor is constructed in a heavy duty lattice framework and will run horizontally 5 metres above the yard before discharging via a 2-way chute, either directly into an existing storage bay or onto a new feed conveyor.

This new feed conveyor approximately 10 metres in length will run horizontally beneath the building roof before discharging via a 2-way chute into an existing baler or alternatively onto a new second feed conveyor.

This second feed, approximately 15 metres in length will elevate beneath the building roof before also discharging via a 2-way chute onto either of two further new feed conveyors.

These two conveyors both approximately 10 metres in length elevate before they discharge respectively onto the existing balers no 2 and no 3 conveyors.

All the new conveyors will be powered by Canning ‘SuperDrive' motorized drums; specifically for use in the waste industry these will be supplied with special labyrinth seals to eliminate any ingress from CD and audio tapes.

John Viviani, Managing Director, commented  "the new systems will provide Grosvenor Waste Management with a fully integrated conveyor system across its 10 acre site to further improve the processing of recyclables at Europe's largest MRF. This is the latest in a series of substantial investments by Grosvenor Waste Management  that will enhance operational and cost efficiencies on the site."