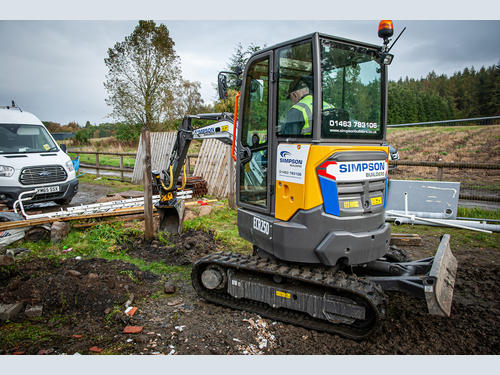 G Simpson (Builders) Ltd of Beauly, near Inverness, has taken delivery of a zero swing Volvo ECR25D compact excavator complete with an Engcon Tiltrotator. The machine has been supplied by SMT GB’s utility equipment dealer for the north of Scotland – CS Machinery Sales Ltd...

“We’ve had plenty of good experience operating Volvo compact machines from hiring them in, plus owning a second hand EC27.” comments proprietor Gordon Simpson. “As we were in the market to buy another two and a half tonne machine, opting for the Volvo brand made perfect sense. So far, we’ve been very pleased with the performance of our new ECR25D.” he continues.

Displayed on the SMT stand at this year’s Black Isle Show, Mr. Simpson’s zero swing ECR25D has been enhanced with the addition of an Engcon Tiltrotator, increasing the flexibility and versatility of the machine. “Yes, the combination of the machine plus the Tiltrotator was a significant up-front investment, but the payback will be equally significant in terms of its labour saving attributes, as well as the ability to get a whole range of jobs done onsite quickly and efficiently.” says Gordon.

The new ECR25D joins a mixed fleet of equipment, which includes: a larger excavator, site dumpers and tele-handlers. With an operating weight of 2.5 tonnes, the new ECR25D is powered by a 1.1 litre low emission engine, developing 21hp.

Since Gordon Simpson has added the Tiltrotator, the machine has been provided with the shorter dipper arm to maintain good stability whilst working at its full reach of 4.48 metres. The machine also sports a generous digging depth of 2.67m, which is ample for digging house footings and laying in drains. The zero swing characteristic of the machine means it can slew within the width of its tracks, which is ideal when working in close proximity to walls or fences, as well as within the tight confines typically found on house building sites.

Simultaneous control of slew and offset movements provides faster, more precise performance. In addition, all hydraulic functions are performed entirely independently of each other, which allows for greater control and less delay when handling multiple tasks. If required, proportional control can also be used to operate a wide variety of hydraulic attachments. Thus, greatly increasing the versatility of the machine.

An automatic two-speed travel system engages when operating in high-speed mode. According to the travel load, this provides the ECR25D with the ability to automatically shift gear from high to low speed.

Another feature designed to increase the efficiency of the machine is the standard auto-idling system. If a control is not used for five seconds, the engine speed lowers to idle. When any control is moved, the engine reverts to the pre-selected speed almost instantly. This system lowers fuel consumption, leads to a longer engine life and reduces environmental noise.