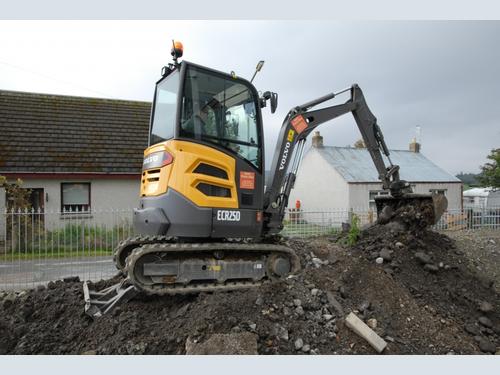 Reid Plant Hire of Kingussie in the Scottish Highlands has opted for its first Volvo compact excavator in the guise of an a zero swing ECR25D..

Tempting proprietor Neil Reid to finally opt for an alternative make from what he’s used to took a little while, after he’d appraised the machine for the first time at the 2015 Black Isle show. Nevertheless, Calum Shaw, who heads up SMT GB’s utility dealer for the north of Scotland, CSM Sales Ltd, was determined to succeed and having arranged a demonstration of the 2.5 tonne machine coupled to a competitive package, he managed to persuade Mr Reid to opt for the new Volvo.

Based just off the busy A9 at Kingussie, the family run plant hire business evolved out of local demand. “I’m a joiner by trade,” explains Neil. “We got into owning our own plant ten years ago because it became increasingly difficult to hire machines in to carry out construction work on our building projects when we needed them most. So we decided to own our own and started out with a small mini-digger. Once other local builders and ground workers knew we had the machines, they started asking us if they could ‘borrow’ them, and so very quickly we morphed into non operated, self-drive hire business,” he continues.

The new ECR25D joins a mixed fleet of mini-excavators, telehandlers and site dumpers. “Yes, we’re delighted with the ECR25D and the fact that it’s a true zero-swing machine,” says Neil Reid. “This means the machine has less likelihood of having its canopies and counterweight being damaged by less experienced operators and can keep its looks and overall integrity intact!”

The ECR25D is the smallest zero-swing model in the Volvo compact excavator range and is powered by a 1.1-litre low-emission engine developing 21hp. With an operating weight of 2.5 tonnes, the ECR25D is available with a choice of short or long dipper arm, giving a reach of either 4.48 metres or 4.77meters, and a dig depth measuring from 2.67 metres to a generous 2.96 metres. The zero-swing excavator design provides exceptional stability which can slew within the width of its tracks and is therefore ideal for self-operated hire applications – for example, working in close proximity to walls and fences. Simultaneous control of slew and offset movements provides faster, more precise performance and all hydraulic functions are performed in total independence for more control and less delay when handling multiple tasks. An added bonus is the ability to operate a wide range of hydraulic attachments using proportional control if required.

An automatic two-speed travel system engages when operating in high-speed mode, automatically shifting gear from high to low according to the travel load. Another feature for increased efficiency is the standard auto-idling system that lowers engine speed to idle if a control is not used for five seconds. The engine reverts to the pre-selected speed almost instantly when any control is moved. This system delivers lower fuel consumption, longer engine life and less environmental noise.