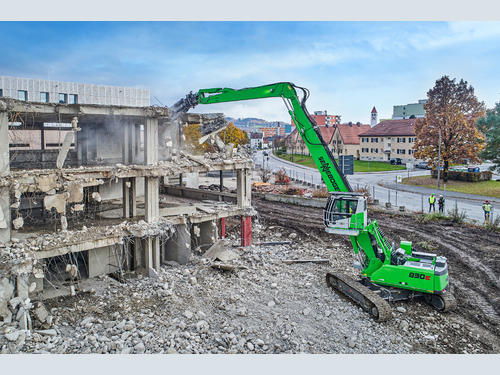 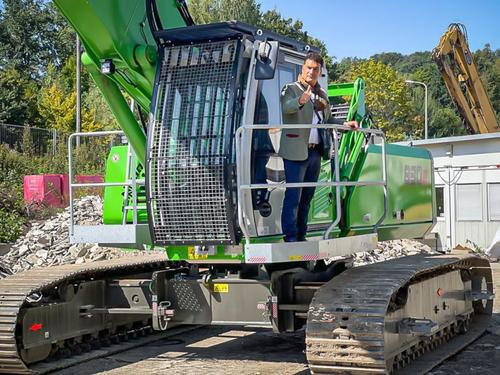 Motivated, the Germany-based Ferraro Group is looking to the future: as one of the leading demolition companies, ranked 12th in Europe, Ferraro continued to invest heavily in its own growth in 2021. With five SENNEBOGEN 830 E demolition machines as well as the 6300 HD Demolition, the world's largest duty cycle crane in demolition, the company is increasing its fleet to meet the challenges of the demolition industry even more efficiently...

Little available space, no new developments and a nevertheless booming construction industry. The overall economic situation, which is still positive, and the turnaround in energy policy, which is leading to the need to renew outdated infrastructure, are all factors for a good order situation for demolition companies.

The Ferraro Group, headquartered in Neunkirchen in the federal state of Saarland, is also equipping itself for future special demolition operations: "In order to meet the diverse requirements of our customers, we develop situation-specific demolition and disposal concepts for disused structures, whether wind turbines, residential buildings or industrial buildings. That's why we were looking for reliable technology to support us in our challenging operations in the future," explains demolition contractor Giuseppe Ferraro, who leads the company with his father and company founder Cav. Damiano Ferraro as managing directors, about the background to the major investment in SENNEBOGEN equipment.

Show of strength for the 830 demolition machine: Premiere on Deggendorf construction site

In Deggendorf, Lower Bavaria, one of the five 830 E demolition machines is currently undergoing its baptism of fire: Ferraro is involved in the demolition of several aging school buildings there. The mega project has been ongoing since 2015 with the deconstruction and reconstruction of the school center. With a building height of around 16.5 m, the job is tailor-made for the 830 Demolition from SENNEBOGEN, which boasts a reach height of up to 19 m depending on the attachment. The compact demolition excavator specializes in the selective demolition of building components by, among other things, easily extracting masses of probationary steel and assisting in the crushing and pre-sorting of the concrete demolition. The latter is a key unique selling point of this construction site: around 70% of the concrete demolition is to be crushed on site and recycled in new construction instead of gravel and sand, thus avoiding the energy-intensive reclamation of resources and protecting the environment.

The complex structure of the buildings and the large number of materials used require a powerful and multifunctional machine such as the 830 Demolition, which, thanks to its powerful hydraulics, can easily drive reinforced concrete shears and other attachments. Especially its stability due to the crawler tracks that can be telescoped up to 4.5 m, its reach and at the same time high load capacity in the entire 360° working range prove to be indispensable on the Deggendorf construction site: Because, for static reasons, certain walls have to remain standing at first, but the machine has to pull out reinforced concrete slabs or reinforcing steel inside the building and load them transversely to the undercarriage - an enormous feat.

The 300 t HD crawler crane, the only one of its kind in the world, now also opens up completely new possibilities for Ferraro. With the 6300 HD, which was specially designed for demolition experts to operate at great heights, a wrecking ball can still be operated at 80 m in height. In the future, nothing will stand in the way of the demolition of high-rise buildings over 50 m high, because when longfront machines reach their limits, the sensitive intuition of the demolition experts at the wrecking ball is called for: classically and efficiently. And when it comes to lifting heavy components in crane operation, the demolition experts can also count on the 6300 HD's enormous 300 t load capacity.

The secret of Ferraro Group's success

Asked about his company's Italian recipe for success, Managing Director Giuseppe Ferraro smiles and says: "We have simply focused on the right industry. After around 35 to 40 years, the dismantling of industrial plants or commercially used buildings is usually more economical than the costly refurbishment, and consequently we never run out of work. With our machinery, we are also able to operate throughout Europe. And we always keep an eye on the costs: Accordingly, we regularly invest in modern machinery to work even more efficiently and economically!"