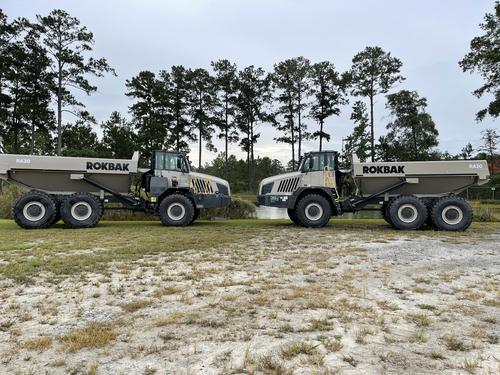 U.S. company Easton Sales and Rentals has registered a notable moment in construction equipment history, taking delivery of the first-ever Rokbak articulated hauler. The Rokbak brand launched September 1, 2021 as part of the Volvo Group, with its RA30 and RA40 articulated haulers built at the company factory in Motherwell, Scotland.

“It’s a great honour for our company to get the first Rokbak articulated hauler and there was real excitement around the dealership when it arrived,” he said. “Rokbak has only been in existence a short time, but it’s built on the legacy of a company with a long history,” he said. “What’s most impressive about the new Rokbak brand is how clear it is to see what it stands for – hard work, performance, reliability, sustainability. It’s also backed by the Volvo Group so there’s no doubt about the quality or performance.”

“It looks fantastic, but a great exterior is just a small part of what makes these machines such excellent haulers. They are unstoppable on site, and can power through anything a project throws at them. So you get unbeatable performance and durability but with a fuel-efficient design which means better ROI on the job,” he continued.

The first delivery was actually part of a package of two RA30 models received by Easton Sales and Rentals. Both were sold to Linco Construction, a family-owned and operated company founded in Houston, Texas in 1992. The company has already put the Rokbak machines to work, helping with earthworks, underground utility, clearing work and more.

Steve Brown, President of Linco Construction, said the design and performance of the Rokbak machines was a perfect match for the company.

“Our business is built on delivering quality work that is competitively priced and performed by experts, so these new Rokak machines are ideal tools to help us do that,” he said. “They’ve only been at work for a few weeks, but we can already see they are workhorses. We have built relationships with our clients on our commitment, hard work and quality, and when we look at the Rokbak haulers, we see those same values shining through.”

The RA30 articulated hauler from Rokbak is a great choice for construction sites, infrastructure developments or quarries. The 30.9 US ton unit offers a heaped capacity of 22.9 yd3 and is powered by a Scania DC9 engine, which develops gross power of 370 hp and a maximum torque of 1387 lbf ft. Its fuel-efficient engine is emissions compliant and meets the requirements of the latest North American legislation with T4F.

Daniel Meara, Regional Sales Manager for Rokbak in North America, said: “We are absolutely thrilled with the enthusiasm our long-standing dealer partners in North America have shown for the new brand and are looking forward to working closely with them over the coming months and years as we establish Rokbak as the industry benchmark for performance, power and reliability.”