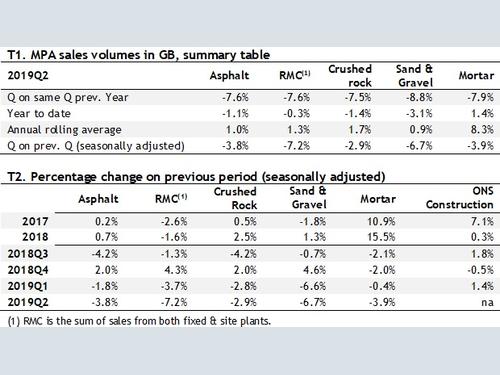 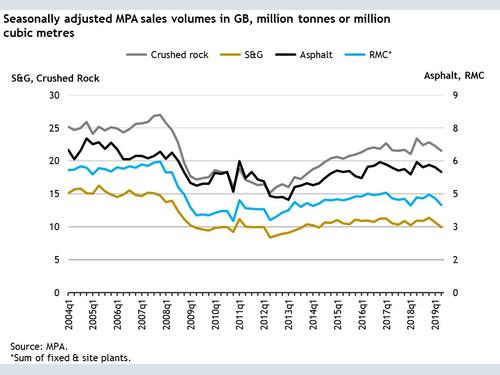 Construction market demand for Mineral Products, including aggregates (crushed rock and sand & gravel), asphalt and ready-mixed concrete (RMC) has been weak since the start of the year. Following two consecutive quarters of deteriorating markets, sales volumes of aggregates in the first half of 2019 stood 1.9% lower compared to the same period in 2018, 0.3% lower for RMC and 1.1% lower for asphalt. Only mortar sales, closely linked to housebuilding, were 1.4% higher in the first half of the year compared to last year.The fall in sales volumes echo official construction data from the Office for National Statistics and other business surveys, which show construction output has flattened in recent months.

Poor sales volumes for these heavy building materials provide physical evidence of the current weakness in construction, as well as an early indication of further weakening to come. Aggregates and RMC are used in all areas of construction, from housebuilding to new commercial offices and retail, roads, infrastructure projects, as well as general repair and maintenance. Mortar by contrast is primarily used in housebuilding, whilst asphalt is closely linked to roadworks. These heavy building materials are         mostly used early in a construction project timeline and are not usually stocked for future use. As such, reduced market sales for these materials indicates that the level of new construction work is falling and that the lack of new projects will continue to dampen the sector’s activity in the coming months.

As has been the case for the past two years, the decline in RMC sales continues to stem from lower demand in London, where both housebuilding and commercial construction is slowing. Sales volumes of RMC in the capital are now 19% below their recent peak in the summer of 2016.

Simultaneously, lower asphalt sales so far this year are disappointing given that some additional volumes were expected following the Chancellor’s announcement last year of £420m additional funding for local road and bridge maintenance in England to be made available in the financial year 2018/19. Government has stated that all of the additional funding was distributed to local government, but evidence suggests that at least some of the funding was used to pay for existing work, rather than any additional road maintenance. Whilst Highways England’s delivery plan proposes a strong pipeline of work over the next two years, current delays fuel industry scepticism about imminent delivery.

Even though the results show growth in mortar sales volumes in the first half of 2019 compared the same period in 2018, mortar sales have now declined for four consecutive quarters, indicating a general hiatus in housebuilding.

Aurelie Delannoy, Director of Economic Affairs at the MPA, explains “the fall in mineral products markets is the most palpable evidence of the general health of the construction industry; growth has all but stopped, and both construction and heavy side building materials markets are starting to show signs of contraction.”

“Ensuring the timely delivery of major infrastructure projects such as HS2 is vital for the success of the construction industry and its supply chain over the coming years. At a time when both housebuilding and the construction of retail and office buildings are slowing, infrastructure projects are increasingly becoming the primary source for growth for the industry. Ideally, these projects, many of which are planned to start only well into the 2020s, should be accelerated to boost confidence and general economic activity, whilst delivering on the productivity improvements necessary to secure sustainable long-term growth.”