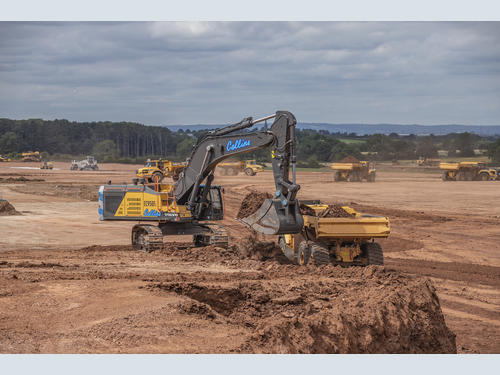 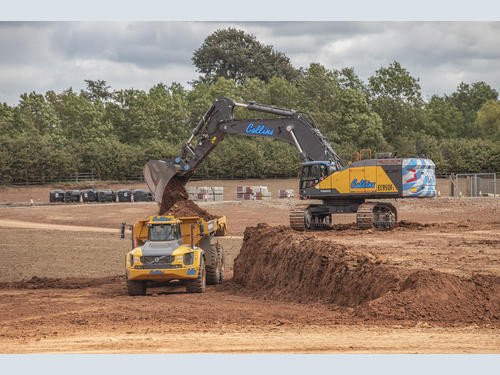 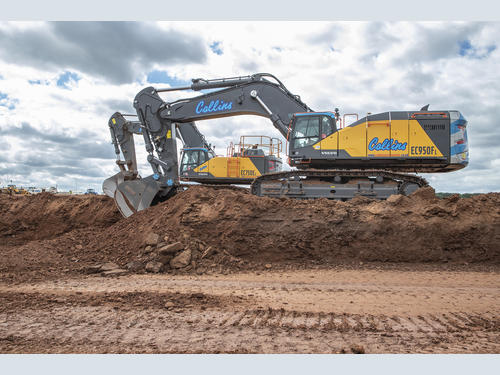 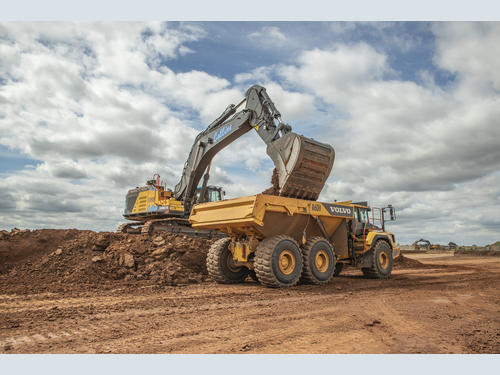 In mass excavation trim, this heavyweight muck-shifter tips the scales at an impressive 104 tonnes. It has already gone to work at the Mercia Park project by J11 of the M42 in Leicestershire, along with a fleet of nine 60-tonne capacity A60H articulated dump trucks.

This 238-acre development site comprises one million cubes of cut and fill, with a 300,000 tonne top-soil strip in a project scheduled to last 27 weeks.

“The EC950F has been on our radar for some time,” explains Collins Earthworks Contracts Manager Wayne Naylor. “We’ve enjoyed great productivity with our fleet of EC750’s on previous projects, but the EC950 has now raised our performance another notch – or maybe two.”

In productivity terms, the introduction of the EC950F, alongside three EC750’s and two EC700’s, at Mercia Park has already enabled the Collins Earthworks team to hit a weekly target of 100,000 cubes of material moved by week two of the project.

Even more impressive is the ability to do this with just 16 ADT’s – one third fewer trucks than previously used during the East Midlands Gateway (EMG) project. The Mercia Park project is using nine A60H’s, four A40s and three A30’s.

“This means fewer operators, fewer pieces of equipment and more material moved,” adds Wayne. “The efficiency gain is impressive, and we’re now looking to bring the earthmoving project to a close in fewer than 27 weeks. It’s unlikely this will be our last EC950.”

Wayne goes on to explain that such a boost in productivity at this latest Collins Earthworks job is all about better matching of larger equipment. “The EC950F’s 6.75 cubic metre bucket lets us fill an A60H in just four passes,” explains Wayne. “When we were loading A60H’s at EMG with an EC750, it took five to six passes to move the same amount of material. And the EC950’s four passes are taking place in 45-50 seconds, generating consistent payloads of 60-62 tonnes.”

For the statistically minded, the EC950F packs a 612hp punch from its EU Stage V-complaint Volvo D16 engine, which powers three hydraulic pumps. The EC950’s main hydraulic control valve is 50% bigger than that used on the 75-tonne EC750.

For Collins’ muck-shifting requirements, the EC950F is equipped with a 7.25m boom with boom float, and a 2.95m ME arm. The mass-excavation configuration also means a bigger bucket cylinder to generate more breakout – typically 43 tonnes-force of bucket tearout. The 6.75 cubic metre bucket gets floating pins that are sealed for life, while an auto-lube system takes care of the machine’s main points.

Keeping the front-end of the EC950 in balance is a 14.5 tonne, hydraulically removable counterweight. This simplifies machine movements too, as Collins Earthworks has built a cradle for one of its low-loader trailers, allowing the excavator to reverse up to the truck, and lower the weight directly into its transport cradle.

The machine’s undercarriage is adjustable too, from a 3.55m working width to a 2.79m transport width. These features will reduce a lot of the associated set-up cost when the EC950F is moved from site-to-site.

Decked out with Collins’ distinctive blue sign-writing, plus blue cab roof and bucket pin caps, the EC950F also features a striking new design of high-vis blue and white decal across the rear of its counterweight

Additional specification of the flagship machine includes a heated and cooled air-suspension seat, and Volvo’s Smart View camera system, providing a 360-degree view around the machine. Both are elements that EC950F’s Operator Mark Oakley appreciates.

“Having spent thousands of hours on an EC750, I can’t believe the speed and power of the EC950F,” says Mark Oakley. “The 750 was a good muck-shifter, but this is on another level.”

“I didn’t expect such a big, heavy machine to feel this agile and this nimble,” adds Mark. “The overall machine balance is impressive, and it is so stable that I believe it could comfortably handle a bigger bucket on this material.”