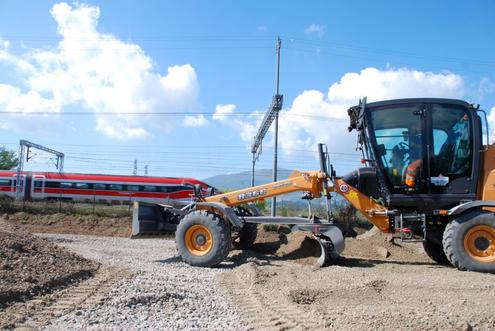 As a full line equipment manufacturer, the addition of motor graders to the CASE Construction Equipment line-up was an important move for the company, providing dealers with an opportunity to attract new customers and to further support existing clients in a variety of industry sectors.

First seen at Intermat in 2015, the C Series line-up includes 13 and 16 tonne models, with the option of 6x4 and 6x6 All Wheel Drive, to suit customer requirements. CASE graders are more and more present across Europe and machines at work in many countries.

“The combination of powerful, highly efficient engines, with our market-leading Hi-eSCR technology, plus Ergopower transmissions makes the CASE C Series grader hard to beat on site. With outstanding precision controls and superior operator comfort, it is easy to see why the C Series machines have been such a success with contractors and rental companies across Europe.” said Grader Product Marketing Manager Massimiliano Sala for Europe Africa and Middle East region.

CASE graders have been proving popular in the East of Europe, in Romania, Hungary and Bulgaria. In Romania the Regional Roads Administration in Valcea purchased a CASE 856C, along with two CASE backhoe loaders.

In Hungary A 6x6 CASE 836C grader has also been delivered to contractor Zöld Út-ÉpítÅ‘ Kft. The grader, which was supplied by CASE dealer CE Dynamic, is working around the town of Tata, in north-western Hungary on a range of road construction and landscaping projects.

In Bulgaria quarry and transportation company PIMK, of Markovo has added an 856C to its fleet and the machine is currently being used to construct a rail line between the cities of Pazardzhik and Septemvri. PIMK also intends to enter the road construction market with the machine.

In Western Europe the first CASE 856C grader in Spain was sold to the Regional Council of Terra Alta, by Simorra Group, the CASE dealer for Aragon, Lleida and Tarragona. The machine is being used to maintain the roads and forest tracks within 743km2 of the Terra Alta region of Catalonia. Spanish dealer Eurocalidad also sold another 856C grader to the local authorities in Segovia.

CASE C Series graders have been equally popular in France, with machines sold across the country. In Paris, Veiga TP was among the first to take an 836C grader equipped with a Leica machine guidance system, for use on a number of sites across the capital.

Further south in Lyon, rental company Barret Reglages Ganathains has also acquired an 836C, for a major project in the centre of the city. The 62,000m2 place Bellecour has been completely pedestrianised for festivals and a large Petanque tournament. To provide the space for the tournament, the area had to be covered in a thick layer of sand and the Mayor of Lyon appealed to CASE dealer Griset Materiels BTP for help and the dealer in turn called up Barret to complete the task in record time.

A third 836C has been sold in the Midi Pyrénées region. This 6x6 model has been purchased by SBTP (Société BIGOURNAISE du TP). The machine has been used to create an 11km long route to allow farmers to transport their herds in the Spring to their summer pastures in the mountains.

In Germany, one of the leading grader rental companies, Hermann Hinnenkamp, has ordered eight CASE graders for projects across the country. The deal for the machines, which included two 856C models and six 836C graders, was signed at the Bauma exhibition in April, with the graders handed over personally to company owners Marco and Hermann Hinnenkamp by the CASE sales team in Berlin.

C Series Graders, new top players in the CASE team
The CASE graders feature a patented Hi-eSCR engine technology, developed by FPT Industrial that meets Tier 4 Final emissions standards using Selective Catalytic Reduction only. There is no requirement for Exhaust Gas Recirculation or a Diesel Particulate Filter, resulting in lower operating costs for the customer and increased fuel efficiency. Earlier this year the CASE 856C grader was awarded the Diesel Progress Excellence in Equipment Engineering Award in the grader category, by Diesel Progress magazine and component supplier ZF, for its achievements in engineering and design.

All of the CASE graders have been designed to deliver a comfortable ride for the operator, with outstanding controllability and precision. Ergopower transmissions ensure smooth shifting, perfectly matching speed and power to the application for maximum productivity.

C Series graders can be ordered from the factory ready to operate with all common blade control brands. This provides maximum flexibility for the customer, with an open architecture allowing plug-and-play installation of grade control systems.