Burkinshaws invest in the crush and increase recycling and revenue 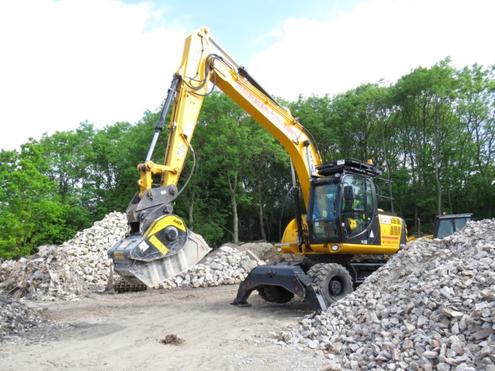 Owning a brand new Series 4 MB Crushing Bucket has given Burkinshaws more versatility in recycling materials both on site and in their yard. Not only are they saving on hire and transport costs, they are also able to better meet their customer’s specific material requirements.

Burkinshaws is a family business, established in 1947 by father Reginald and then taken over by his son Bernard in 1996. The company, based in Rotherham, hire out a large range of machines including Rubber Ducks, Dumpers and Lorries.

They are specialists in all aspects of Civil Engineering and Plant Hire, as well as being suppliers of top soil, road planings, sub base and crush material. Their civil engineering projects involve breaking up concrete, crushing, recycling and re-using fill material for road construction amongst other things. For them, a focus on recycling is key.

As suppliers of JCB machines, Burkinshaws had seen an MB Crushing Bucket in action at their factory, on a quarry testing ground. The bucket was on a 10t excavator and was crushing limestone. To Bernard, the benefits were clear. He was impressed. They’d previously used a tracked crusher in their yard that he’d hired in when needed. However, he realized a bucket would prove much more versatile and allow them to crush whenever they had free time, meaning it would prove productive. Therefore he chose to make the investment and contacted Mick Reeve of Worsley Plant.

Bernard says: “Our new bucket beats a tracked crusher hands down. It is a more compact machine giving a better performance. We are recycling 25% more material through it as doesn’t jam like the larger machine. Having the big crusher meant haulage of £300 each way. Owning the bucket it’s free (after the initial outlay). It’s versatile and we can take it onto site too and crush on smaller jobs – a major benefit over a larger crusher.”

Burkinshaws can now tailor material to meet their customer’s requirements. They can crush from 75mm down material for a variety of uses, be it stone, concrete or brickwork. As material comes in they can crush, recycle and sell the material on or use it on their own projects.

Mick Reeve adds, “Burkinshaws are delighted with their new crushing bucket. For them the benefits are clear. They are recycling materials, cutting costs and enjoying a new revenue stream by selling on materials at required specifications. For us, another happy customer.”