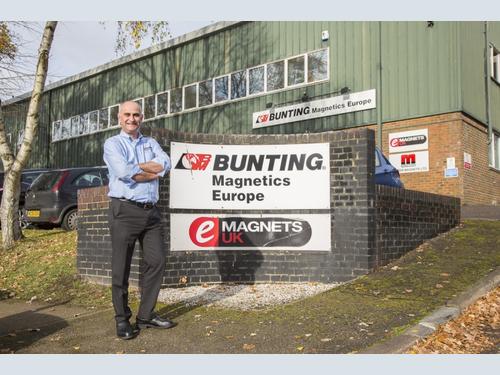 Bunting Magnetics Europe Ltd has had two consecutive months of record sales in September and October 2017.

Bunting Magnetics is one of the world’s leading suppliers of Magnets, Magnetic Assemblies, Magnetic Separators and Metal Detectors. The European manufacturing headquarters are based in Berkhamsted in Hertfordshire, UK and they have an extensive overseas network of distributors and marketing agents.

The latest announcement of record monthly sales follows a prolonged period of growth. Sales in 2016 reached a record high for the European operation and in January Bunting announced the acquisition of UK magnetic separator and metal detector competitor, Master Magnets.

Dave Hills, Bunting Europe’s Head of Sales, gave an insight into the background of the latest record figures:

“Despite media reports of a potential slowdown in manufacturing and continued concerns about BREXIT, we [Bunting Europe] continue to see a growing demand for our products. Our ongoing growth is the result of continued investment in our resources, both mechanical and personnel, whilst expanding our presence overseas. It’s been tough, but we continue to work hard to execute our strategic plan.”

Sales growth has been across the Bunting product portfolio that includes the supply of high powered Magnets such as Neodymium, complex and bespoke Magnetic Assemblies, and Magnetic Separators for processing and manufacturing industries such as plastics and food. The latest figures do not include sales for the Master Magnets part of their business, which has also seen significant growth in 2017 since the acquisition.

The export focus has also been supported by exhibiting at five major trade shows in the UK. Bunting featured at the international plastics exhibition, Interplas UK in October, and also joined Master Magnets for a joint presence at two major recycling shows, Waste 17 (June) and RWM17 (September).

“Our marketing activity in 2017 has been very busy,” explained Hills, “and the result is sustained sales growth. With that growth, we have to invest by expanding our team: in the offices, on the road, and on the shop floor. It is an exciting time and we already working hard on implementing our plan for 2018.”