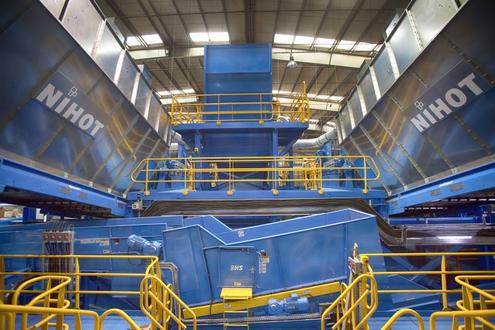 The facility is the largest in the Middle East, processing in excess of 500,000 tonnes of MSW annually. The comprehensive system retrofit has transformed Bee’ah’s MRF into the most advanced in the region, reaffirming the company’s commitment to pushing the boundaries of environmental innovation.

“In years’ past, our trommel based system was creating uneven size fractions and contamination through mixing. We were unable to effectively separate organic material from dry commodities, and were very dependent on manual sorting,” said Daker El-Rabaya, Bee’ah’s Managing Director of Waste Processing and Treatment. “The system BHS delivered is more efficient, increases our capacity and is automatically creating material fractions that were previously unattainable.

Screen and air technology effectively remove organics and inert materials early in the process to present segregated fiber and container line fractions. We are optically targeting both containers and film to produce marketable products from a challenging material stream. The technology has introduced Bee’ah to a new level of performance; we are very pleased with the results,” El-Rabaya concluded.

The plant’s old trommel screens were replaced with two new BHS Tri-Disc™ screens, which have greatly improved screening efficiency, reduced power consumption, and allowed for better use of space. The new system has increased throughput, recovery of organic material and the recovery of other commodities including plastic containers. Plastic film recovery has doubled thanks to the FiberPure™ system, a combination of NRT optical and Nihot air technology.

“Bee’ah is an innovative company, proactively adapting to new technology. The company’s commitment to recovery and processing excellence is a benchmark for others to follow,” said BHS CEO Steve Miller. “The system was already among the largest in the world, and is now among the most advanced. Bee’ah is a true leader in its space, and while we were excited when chosen as the system provider, we are more excited today to see the MRF performing at a high level. We look forward to ensuring success for years to come.”