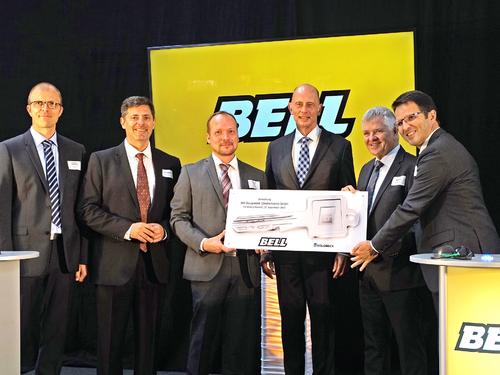 Bell Equipment has evolved from a global supplier to a global manufacturer with the €17 million expansion of its Eisenach-Kindel plant in Germany. The project, which attracted a grant from the state development agency, the LEG Thuringen, for its contribution towards the improvement of the regional economic structure, accommodates the fabrication of Articulated Dump Truck components for the Northern Hemisphere.

Bell Equipment Group Chief Executive Officer, Leon Goosen, officially opened the new production complex at the end of September and said the “momentous occasion” was a progression of the group’s sustainable growth strategy to bring the Bell Articulated Dump Truck range closer to its customer in the major global markets.

The strategy first gained traction in 2003 when Bell opened its ADT assembly plant in Eisenach-Kindel in response to growing activity in Europe. Leon explained that it was the “rich history in vehicle production, the location relative to infrastructure, along with investment support by the Ministry for Economic Affairs and the LEG Thüringen” that first attracted Bell to Germany’s Thüringen region in the early 2000s.

“This, our third project here, is a significant capital investment for the Bell Equipment Group and completing the project in just over 12 months is a tremendous achievement that demonstrates our commitment to grow as a global manufacturer,” continued Leon. “The investment is a direct response to the widespread acceptance and growth in demand of our Bell Articulated Dump Truck range. Trucks built in this factory are destined primarily for our Northern Hemisphere markets of Europe and the UK, and a significant proportion of production is exported to North America and Canada.”

The new facility directly adjoins the existing factory halls, effectively tripling the available production and storage space, and providing in-house manufacturing of truck components in Europe for all the Bell ADT models (B20E to B50E) that are assembled in Germany.